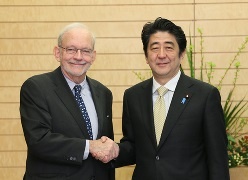 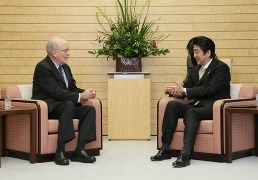 On February 25, commencing at 8:45 a.m. for approximately 15 minutes, Prime Minister Shinzo Abe received a courtesy call from Mr. Anthony Lake, Executive Director, UNICEF, who made a working visit to Japan upon invitation by the Ministry of Foreign Affairs. An overview of the meeting is as follows:

1. At the start of the meeting Prime Minister Abe expressed his respect for the significant contribution UNICEF makes to human security through its support for children, and expressed gratitude for a scheduled trip of Executive Director Lake to disaster-affected areas. Executive Director Lake replied that UNICEF is also placing an emphasis on human security, and that he hopes to learn from the vigorous recovery of the areas during his visit there.

2. Prime Minister Abe said he will work together with UNICEF on key challenges, including disaster risk reduction, women’s issues and assistance for Syria, and he explained Japan’s efforts. In addition, Prime Minister Abe requested Executive Director Lake’s attendance at the UN World Conference on Disaster Risk Reduction, which will be held in Sendai in March next year. He also stated that Japan is also promoting cooperation with ASEAN countries in the field of disaster risk reduction utilizing Japan’s knowledge, and that Japan will continue to cooperate with UNICEF. Executive Director Lake stressed the importance of the perspective of children in disaster risk reduction as they are the first ones to be victims when disasters strike.

3. Prime Minister Abe said that the Government of Japan will continue to make an appropriate financial contribution in view of the importance of UNICEF, and he requested that the number of Japanese staff at UNICEF be increased. In response, Executive Director Lake expressed gratitude for Japan’s financial contribution and said UNICEF will strive to achieve accountability that focuses on results, and that he will also make an effort to increase the number of Japanese staff.