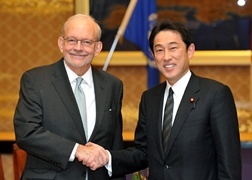 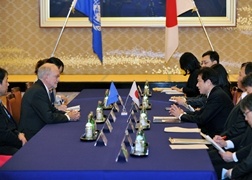 On February 24, commencing at 7:00 p.m. for approximately one and a half hours, Minister for Foreign Affairs Fumio Kishida held a meeting and dinner, with Mr. Anthony Lake, Executive Director, UNICEF, who is making a working visit to Japan upon invitation by the Ministry of Foreign Affairs. An overview of the meeting is as follows:

1. At the beginning, Minister Kishida stated that UNICEF, which addresses global challenges through its support for children, is an important partner of Japan, and that Japan will continue to cooperate in addressing key policy challenges, including women’s issues, disaster risk reduction and Syria. Minister Kishida also said that the Government of Japan intends to strengthen support for developing countries in order to realize “a society in which women shine.” He expressed his expectation for UNICEF’s cooperation for the Third UN World Conference on Disaster Risk Reduction, which will be held in Sendai in March next year. He also stated that Japan will continue to engage in humanitarian assistance alongside contributing to political dialogue in order to bring back a beautiful Syria.

2. In response, Executive Director Lake said UNICEF will cooperate closely with Japan on all of the challenges. He said the focus should be on the women who are the mothers in order to reduce child mortality rates, and that the perspective of children, whose positions are the most vulnerable, is important in disaster risk reduction. Executive Director Lake said he was deeply impressed by the address Minister Kishida delivered at the Geneva II Conference, and that the current circumstances, in which Syrian children are exposed to the violence and unable to receive education, must be resolved. Executive Director Lake also said that he will observe the local recovery and learn from the experiences of the disaster-affected areas during his visit there on the following day.

3. Minister Kishida said that the Government of Japan will continue to make an appropriate financial contribution in view of the importance of the Japan-UNICEF cooperative relationship, and he requested that the number of Japanese staff at UNICEF be increased. In response, Executive Director Lake expressed his gratitude for Japan’s financial contribution and said that UNICEF intends to focus on results-oriented management reform. He said he will continue to make an effort to increase the number of Japanese staff.

4. Minister Kishida said that because UNICEF enjoys a cooperative relationship with the International Olympic Committee (IOC), he expects to cooperate with UNICEF toward the success of the 2020 Tokyo Olympic and Paralympic Games. Executive Director Lake replied that he would be happy to cooperate. Additionally, both sides exchanged views on achieving the Millennium Development Goals, the formulation of the post-2015 development agenda, the promotion of universal health coverage, and cooperation for the global eradication of polio.