(Photo: Cabinet Public Relations Office)
On November 30, Mr. Shinzo Abe, Prime Minister of Japan, attended the COP 21 (21st Session of the Conference of the Parties to the United Nations (UN) Framework Convention on Climate Change) Summit Meeting hosted by H.E. Mr. François Hollande, President of the French Republic, in Paris. The overview is as follows.
(This summit meeting was held at the initiative of the chair country, France, in order to increase momentum for a new international framework for greenhouse gas reduction from 2020. Leader-level representatives from approximately 140 countries participated, including the Honorable Barack H. Obama, President of the United States of America, Rt. Hon. David Cameron MP, Prime Minister of the United Kingdom, H.E. Dr. Angela Merkel, Federal Chancellor of the Federal Republic of Germany, and Mr. Xi Jinping, President of People's Republic of China.)

1 Attendance at the opening ceremony, etc. 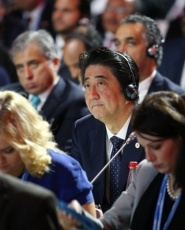 Prime Minister Abe attended the summit meeting opening ceremony, which was held by the chair country from around 11:00 a.m. This ceremony included speeches from President Hollande, Mr. Ban Ki-moon, Secretary-General of the UN, and H.E. Mr. Laurent Fabius, Minister of Foreign Affairs of France (COP21 President), in which they mentioned the necessity for reaching an ambitious legal agreement in which all countries participate in order to achieve the below 2℃ objective.
Following this, Prime Minister Abe held bilateral meetings with President Hollande as well as with the leaders of other countries attending the COP21 Summit Meeting, and he also took part in a luncheon hosted by President Holland, where he exchanged views on bilateral relations and the challenges facing the international community, including climate change.

2 Attendance at the ceremony to launch Mission Innovation

Prime Minister Abe attended a ceremony to launch Mission Innovation, an international initiative for strengthening research and development relating to clean energy, from around 4:50 p.m. (The ceremony was attended by President Hollande, President Obama, H.E. Mr. Narendra Modi, Prime Minister of the Republic of India, Mr. Bill Gates and others). At the ceremony, President Hollande, President Obama and others expressed their determination upon the launch of Mission Innovation .
In his speech at the summit meeting held immediately following this, Prime Minister Abe emphasized the significance of innovation as the key to balancing climate change measures and economic growth, and expressed his approval of this initiative, which is in line with the efforts Japan has been consistently pursuing thus far.

3 Speech by Prime Minister Abe and speeches by other countries 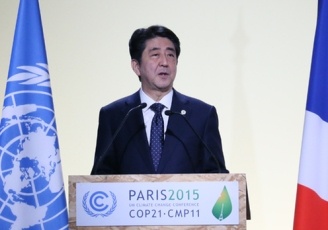 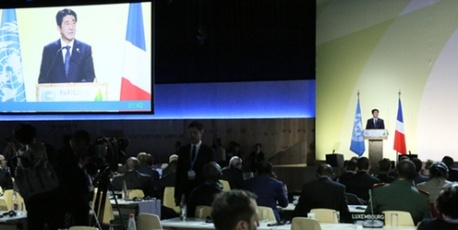 (1) Prime Minister Abe gave a speech at the Summit Plenary Session from around 5:40 p.m., in which he conveyed his sincere condolences to the victims of the recent simultaneous terrorist attacks in Paris, expressed respect for, and solidarity with, the Government and people of France for holding COP21 and not yielding to terrorism, and stated that:
(i) the Earth is the sole homeland to our humankind and now is high time to build a new framework for reducing greenhouse gases, which developed and developing countries join together;
(ii) it has been pointed out that the present INDCs submitted by countries alone are unlikely to achieve the below 2℃ objective. I would like the Paris Agreement to include the setting of a long-term goal as well as the establishment of a common process for the review of nationally determined mitigation contributions. Japan on its part will steadily implement its already-submitted, ambitious Intended Nationally Determined Contribution (INDC) and its national adaptation plan;
(iii) Japan recently announced the “Actions for Cool Earth 2.0 (ACE 2.0),” a set of contributions comprising support for developing countries and innovation. Regarding the first component of the contribution, support to developing countries, Japan will provide, in 2020, approximately 1.3 trillion yen of public and private climate finance, 1.3 times up from the current level, to developing countries I believe the increased finance from Japan clarify a pathway to the achievement of the commitment made at COP15: the mobilization by 2020 of $100 billion in climate finance per year to developing countries. Regarding the second component, innovation, the key to acting against climate change without sacrificing economic growth is the development of innovative technologies. By next spring Japan will formulate the “Energy and Environment Innovation Strategy.” Prospective focused areas will be identified and research and development on them will be strengthened;
(iv) now is high timeto build a new international framework.

(2) Speeches from the leaders of countries around the world took place before and after this, and the leaders all presented their strong resolve to agree on a framework applicable to all Parites. Within that, representatives from developed countries mentioned the necessity of establishing a long-term goal, the importance of developing countries’ participation, and contributions on the financial front. Representatives from developing countries mentioned the principle of common but differentiated responsibilities, and the importance of support from developed countries. (Incidentally, in regard to Japan’s pledge to increase its support for developing countries, President Hollande, who held a bilateral meeting with Prime Minister Abe, expressed gratitude for Japan’s contributions and noted that the goal of contributing 100 billion U.S. dollars per year by 2020 is expected to be achieved partly as a result of Japan’s contributions). 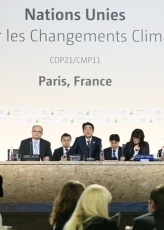 In addition, immediately after the speeches Prime Minister Abe chaired the COP21 Summit Meeting proceedings as the Acting Chair, based on a request from the chair country France and in light of Japan’s past role as the COP chair country. (Japan was the chair country for COP3 in 1997.)