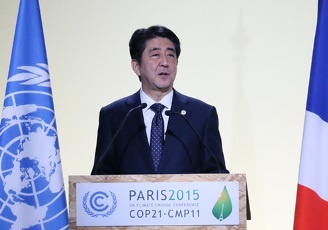 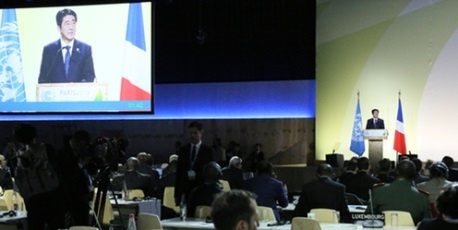 (Introduction)
First of all, I express my deepest condolences to the victims of the recent terrorist attacks that occurred in Paris. I extend my respect for and show my solidarity with President Hollande, both the Government and people of France who refused to submit to terrorism by opening COP21.

Today we must demonstrate our ability to overcome overwhelming challenges with our solidarity no matter how different our nations or cultures are.

(Significance of the Paris Agreement)
Eighteen years ago, the Kyoto Protocol, an important step to counter global warming, was adopted. Global average temperature, however, has been on the gradual rise ever since. We have witnessed frequent occurrence of extreme weather- related disasters worldwide such as heavy rain and drought. Beautiful islands now face the risk of submersion. The Earth is the sole homeland to our humankind. We must hand it down safely to the generations of our children and grandchildren. Now is high time to build a new international framework, which developed and developing countries join together.

(Constructive proposal for the international framework)
Many point out that the present INDCs submitted by countries alone are unlikely to achieve the below 2℃ objective. I would like the Paris Agreement to include the setting of a long-term goal as well as the establishment of a common process for the review of nationally determined mitigation contributions.

Japan on its part will steadily implement its already-submitted, ambitious INDC and its national adaptation plan.

We will enrich the livelihood of people living on the Earth, while we reduce greenhouse gas emissions. We will take geothermal energy from the center of the Earth and deliver clean electricity to people in Africa. We shed light generated from sunlight in those areas not yet covered with the power grid. We pass on what cities in Japan have gone through to various emerging Asian cities that are experiencing rapidly growing concentration of population. We provide necessary equipment and know-hows so that people of island states in the Pacific can evacuate with ample time available before a typhoon approaches. These are several fields of activities in which Japanese companies have been engaged for a long time and have sophisticated their skills. I am all confident that we can be of great help for every one of you.

Japan has contributed $1.5 billion to the Green Climate Fund (GCF). I would like to see the fund made available for the support to developing countries as soon as possible. I will ensure Japan's involvement in the work of GCF from the project-forming stage for swift implementation of the next year's support of $2.5 billion.

The second component of Japan's new set of contribution is innovation. The key to acting against climate change without sacrificing economic growth is the development of innovative technologies. To illustrate, there are technologies to produce, store and transport hydrogen towards realizing CO2–free societies, and a next-generation battery to enable an electric car to run 5 times longer than the current level. By next spring Japan will formulate the "Energy and Environment Innovation Strategy." Prospective focused areas will be identified and research and development on them will be strengthened.

The "Mission Innovation," proposed by the interested countries, is in line with what Japan has consistently worked on, and I hereby express Japan's intention to join the initiative.

(Conclusion)
We, the leaders of the world, have all gathered here in Paris despite the challenges posed by terrorist attack. Let all of us achieve an agreement on new framework and show our solidarity.