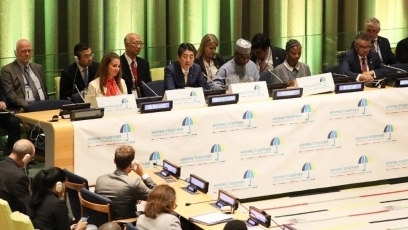 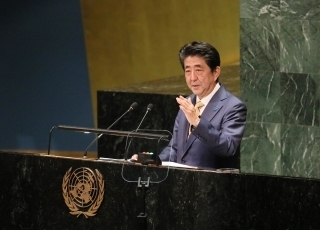 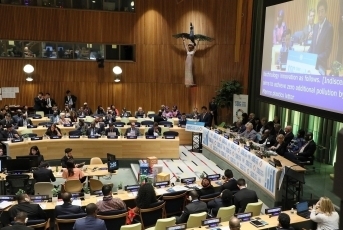 1 Overview of results from major events

(1) Address to the General Debate of the UN (September 24 (New York time; the same hereafter))

The overview of Prime Minister Abe's address at the UN General Assembly is as follows.

A. The 75th anniversary of the founding of the United Nations

B. Education and women

Prime Minister Abe and President Bach confirmed that they would continue to work together for the success of the Olympic and Paralympic Games Tokyo 2020.
Prime Minister Abe explained to President Bach about the state of progress toward adoption of a United Nations General Assembly resolution concerning Olympic Truce. In response, President Bach stated that he intended to cooperate with Japan while aiming to gain as many co-sponsors as possible so that the resolution is adopted by consensus.
Furthermore, they also exchanged views on the safety of Japanese food products.

Prime Minister Abe expressed his congratulations on 20 years of King Abdullah’s reign. The two leaders confirmed that they would strengthen relations in a variety of areas, including diplomacy, defense and economy, and would further deepen the Japan-Jordan strategic partnership. The two leaders also exchanged broad-based views on the situation in the Middle East and other matters, and they shared the view that the two countries  would pursue greater cooperation for peace and stability in the region and the international community.

In light of the increasingly serious situation due to the recent attacks on the oil facilities in Saudi Arabia, Prime Minister Abe and President Rouhani exchanged views candidly toward easing tensions and stabilizing the situation in the Middle East.
Prime Minister Abe asked Iran to play a constructive role toward regional peace and stability, and expressed Japan’s intention to fulfill a role in easing tensions and stabilizing the situation.
Furthermore, Prime Minister Abe urged Iran to maintain the Joint Comprehensive Plan of Action (JCPOA) and to secure safety of navigation in the Middle East.

Prime Minister Abe welcomed the reunion with Secretary-General Guterres following their previous meetings on the occasions of the G20 Osaka Summit in June and the G7 Summit and TICAD7 in August. Prime Minister Abe then stated that, based on the consensus reached at the SDG Summit, Japan will make utmost efforts in implementing the SDGs both at home and abroad. The Prime Minister also congratulated Secretary-General Guterres for the successful conclusion of the UN Climate Action Summit and stated that Japan will play its role and fulfill its responsibility under the Paris Agreement. Recognizing that next year marks the 75th anniversary of the United Nations, both sides reaffirmed the importance of the reform of the United Nations including the Security Council.
Both sides exchanged views on North Korea and reaffirmed the importance of full implementation of UN Security Council resolutions. Prime Minister Abe again sought understanding and cooperation on the early resolution of the abductions issue, and gained the support of Secretary-General Guterres.
Both sides also exchanged views on the current situation in the Middle East region. Prime Minister Abe stated that Japan will continue to make diplomatic efforts to ease the tensions.

While appreciating Ms. Murad’s courage and activities, Prime Minister Abe expressed that Japan would actively support reconstruction of areas liberated from ISIL to realize stability in Iraq, and that Japan would continue to work to prevent sexual violence in conflict and to support victims. Prime Minister Abe also announced Japan’s intention to provide medical equipment, including equipment for neonatal and infant care, to the Sinjar General Hospital located in northern Iraq. In addition, Prime Minister Abe stated that he pays respect to Ms. Murad’s activities of supporting women victims and their children in the Middle East region and beyond.
In response, Ms. Nadia Murad expressed her gratitude for Japan’s assistance.

F. Meeting with President-elect of the European Council (Prime Minister of the Kingdom of Belgium) Michel (September 25)

Prime Minister Abe stated that the EU was an important partner of Japan that shared universal values, and that he intended to work closely with President-elect Michel. In response, President-elect of the European Council (Prime Minister of the Kingdom of Belgium) Michel stated that he intended to continue to further deepen cooperation.
Regarding Japan-EU relations, Prime Minister Abe stated that cooperation based on the Japan-EU Economic Partnership Agreement (EPA) and Japan-EU Strategic Partnership Agreement (SPA) was proceeding steadily, including in the Europa Connectivity Forum, and that he intended to work together to expand it. In response, President-elect Michel stated that he intended to cooperate with Japan, which shared values with the EU. Furthermore, Prime Minister Abe called for the cooperation of the EU toward alleviation of import measures on Japanese food products, etc. as early as possible.
Regarding North Korea, Prime Minister Abe stated that it is crucial to implement the United Nations Security Council resolutions to realize the CVID of all weapons of mass destruction and ballistic missiles of all ranges. Furthermore, he called for understanding and cooperation towards the early resolution of the abductions issue, and President-elect of the European Council Michel expressed his understanding.
Concerning Japan-Belgium relations, the two leaders confirmed that the ties between the imperial household of Japan and the royal family of Belgium are the foundation of the friendly relations between their two countries, and they agreed to develop the relations of their two countries in a wide range of fields.

The leaders reaffirmed the recognition that the Japan-U.S. Alliance is stronger than ever before as it marks their fifth Summit Meeting this year alone, including the visit to Japan by President Trump and Mrs. Trump as the first State Guests in the era of Reiwa in this May. The two leaders reaffirmed their recognition that the Japan-U.S. alliance is stronger than ever before, and shared the view on continuing to further strengthen the unwavering Japan-U.S. Alliance.
Regarding the Japan-U.S. trade negotiations, the two leaders confirmed that the both sides reached final agreement on the Japan-United States Trade Agreement and the Japan-United States Digital Trade Agreement, and issued the Joint Statement.
Furthermore, Prime Minister Abe explained to President Trump that investment by Japanese companies in the United States has been contributing to the expansion of U.S. employment, including the facts that since the inauguration of the Trump Administration, investment of a cumulative total of 25.7 billion dollars in the U.S. has been announced, that over 50,000 jobs have been created, and that Japan has become the largest investor in the U.S. In response, President Trump expressed his great appreciation.
Moreover, the leaders exchanged views on the situation on North Korea, including issues of concern such as the abductions, nuclear, and missiles issues, and confirmed that Japan and the United States, as well as Japan, the United States, and the Republic of Korea would continue to closely cooperate on these issues.
The leaders shared the view that Japan and the United States would continue to cooperate toward easing tensions and stabilizing the situation in the Middle East. In relation to this, the two leaders strongly criticized the recent attacks on the crude oil facilities in Saudi Arabia. Prime Minister Abe stated that in light of the capabilities of the Houthis it was difficult to conclude that these attacks had been carried out by the Houthis, while Japan has been undertaking information gathering and analysis to evaluate this incident, and would continue to work together with the countries concerned, including the United States.
Furthermore, Prime Minister Abe said that the previous day he had called on President Rouhani to ensure that Iran exercised self-restraint to ease the situation and to ensure that Iran exercised its influence constructively. Prime Minister Abe also said that he intended to work closely with the United States to bring about peace and stability in the Middle East.

H. Dinner with President of the European Council Tusk (September 25)

Prime Minister Abe stated that he and President Tusk had been able to build the closest Japan-EU relations ever through the Japan-EU Economic Partnership Agreement (EPA) and the Japan-EU Strategic Partnership Agreement (SPA), that he would attend the Europa Connectivity Forum held in Brussels on September 27 and intended to show the leadership of Japan and the EU. In response, President Tusk stated that together with Prime Minister Abe the EU had been able to achieve historical outcomes for Japan-EU relations, and that he was grateful that he had been able to build a strong relationship of trust with Prime Minister Abe.
The two leaders took this opportunity to hold an exchange of views about regional situations, etc., including the withdrawal of the United Kingdom from the EU and the Middle East situation.

Prime Minister Abe  explainedthe fact that Japan achieved UHC with the introduction of its national health insurance system, which has provided a foundation for Japan’s social and economic development and for a healthy ageing society. He also stated that at the G20 Osaka Summit and TICAD7, the promotion of a cross-sectoral approach combining nutrition, water and sanitation, in addition to the health., and the importance of strengthening health financing was discussed, and he emphasized the importance of these points.
At the meeting, the Political Declaration on UHC was endorsed, which reaffirmed the goals of providing basic health care services to all people and eliminating impoverishment due to health-related expenses by 2030, and strong political-level commitments for achieving UHC were demonstrated.

At the SDG Summit 2019, the first SDG summit held since the SDGs were adopted in 2015, Prime Minister Abe shared achievements in the promotion of the SDGs over the past four years, including the outcomes in the G20 Osaka Summit and TICAD7, and then, as the head of the SDGs Promotion Headquarters in which all of the cabinet ministers participate, introduced the fact that all of Japan has been promoting the SDGs, in particular through the Japan SDGs Award and SDGs Future Cities initiatives, and stated that Japan would revise the “SDGs Guiding Principle”, its medium to long-term strategies for promoting the SDGs, to present Japan’s evolved “SDGs model” by December.
UN Secretary-General Guterres, President of the United Nations General Assembly Muhammad-Bande, the leaders of each country, and the heads of international institutions, etc. participated in this summit, and the SDG Summit Political Declaration stating perceptions of the current situation and a call to boost the action, etc. was adopted as the outcome document.