Speeches by the Foreign Minister 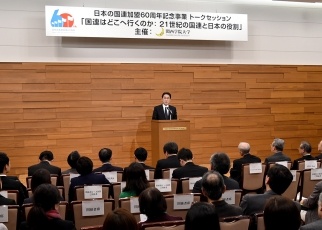 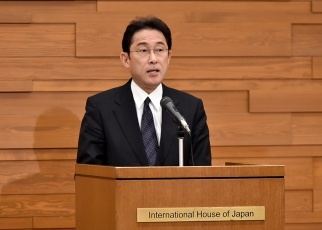 I am Fumio Kishida, Minister for Foreign Affairs.

I would like to extend my heartfelt congratulations for the organization of this high-level talk session hosted by Kwansei Gakuin University as well as my appreciation for being invited here today. I would like also to express my sincere respect and gratitude for the contributions by Kwansei Gakuin University toward the development of Japan's global human resources, including today's event. It is a great honor for me to have the opportunity to explain the roles of Japan and the United Nations in the presence of distinguished guests who have been active at the United Nations, such as Dr. Yasushi Akashi, former Under-Secretary-General of the United Nations.

Japan accomplished its long-desired goal of joining the United Nations in December sixty years ago, as the 80th Member State in the world. For Japan, reborn after the war as a peaceful nation adhering to internationalism, becoming a member of the United Nations signified its genuine return to the international community, as a nation that contributes to maintaining international peace and security.

Since then, United Nations diplomacy took hold as a major component of Japan's diplomatic policy. This is also evident in Japan's extensive contributions to the United Nations during the past 30 years as the world's second largest financial contributor. Personally, I have placed great emphasis on United Nations diplomacy and have attended the United Nations General Assembly for three consecutive years since becoming Minister. In particular, I have led discussions on the issue of disarmament and non-proliferation including through serving as Co-President of the Conference on Facilitating the Entry into Force of the Comprehensive Nuclear-Test-Ban Treaty (CTBT) with H. E. Mr. Erlan Idrissov, Minister of Foreign Affairs of Kazakhstan, at the United Nations General Assembly last year.

Today I intend to mainly discuss Japan's efforts in the United Nations such as issues of importance as a United Nations Security Council (UNSC) member and UNSC reform, as well as efforts of "Japan working together with developing countries", especially in development.

Last year, Japan was selected for the 11th time in the UNSC non-permanent Member State election and joined the UNSC in January 2016. Eleven times is the largest number of times among Member States, and I am proud of this accomplishment. It also reflects solid trust in and expectations for Japan from the international community. Japan's selection this time was also made possible by the warm assistance of Bangladesh which supported Japan and withdrew its own candidacy. With an awareness of this significance, Japan is focusing on three points from the perspective of its responsibility for global peace and security.

Contributions to peace and security in Asia

The first point is contributing to peace and security in Asia as a peaceful Asian country.

Peace and security in East Asia are extremely important to Japan's national security, and Japan bears a heavy responsibility, while taking into account its own national interests as a major country and direct presence in the region. In particular, North Korea's nuclear test in January and ballistic missile launch in February seriously undermined the peace and security of Asia, including Japan, and the international community.

It will soon be two months since the nuclear test on January 6. Further delay in the adoption of a resolution would be tantamount to the UNSC abdicating its responsibility. Japan will make utmost efforts to achieve expeditious adoption of a stronger UNSC resolution than ever, based on the cooperation with countries such as the United States and the Republic of Korea. We will also work for the improvement of the human rights situation in North Korea, including the early resolution of the abductions issue, making use of the United Nations and other fora.

Contributions to peace and security worldwide

The second point is taking the initiative regarding peace and security worldwide, not only in Asia, because of increasingly close ties amid globalization. In fact, over 80% of UNSC consultations on regional problems pertain to the Middle East and Africa.

Japan will serve as the UNSC President in July 2016, and will hold the Sixth Tokyo International Conference on African Development (TICAD VI) in Kenya this August. I would like to take this occasion to announce that Japan will hold an open debate on the theme of peace-building in Africa as the chair country at the UNSC in July in the context of demonstrating Japan's emphasis on Africa at home and abroad. If circumstances allow, I would like to personally chair this meeting in New York.

Reconstruction of conflict-affected countries cannot be accomplished just by adopting UNSC resolutions. It is important to implement various activities, such as conflict prevention, peace building, participation in United Nations Peace Keeping Operations (PKO), humanitarian assistance, and development cooperation, in a comprehensive manner while pursuing synergy effects. Japan is one of a handful of countries with this knowhow and capability. In Africa, we have been actively contributing at various phases from post-conflict reconstruction to development, including the dispatch of the Self-Defense personnel to the PKO in South Sudan, election-monitoring, refugee assistance, transportation of supplies, and road and bridge construction. These efforts have been highly appreciated by the local people. I would like to share this experience in the open debate of the UNSC in July when Japan will serve its Presidency.

The third point is putting our utmost efforts into UNSC reform.

More than 70 years have passed since the formation of the United Nations. During this time, the international community's landscape has changed significantly and the number of Member States has increased by almost four-fold from 51 countries to 193 countries. However, the UNSC's composition remains almost entirely unchanged. It is essential to reform the UNSC and reflect the realities of the international community in the 21st century. The number of permanent members, not only non-permanent members, should be increased, and countries suited to handle the responsibilities should become members. I believe Japan is a country that should be a permanent member, and Japan is presenting the G4 reform proposal with India, Germany, and Brazil. Specifically, this proposal calls for increasing permanent member seats by six and non-permanent member seats by 4-5 and thereby raising the total of UNSC member countries to 25-26. I am convinced that this change will realize the improvement of the UNSC's representativeness, legitimacy, and effectiveness.

Japan has contributed internationally by emphasizing dialogue and solely using peaceful methods in its contributions to peace in Cambodia and efforts for peace in Mindanao and Sri Lanka. It has also actively pursued disarmament and non-proliferation at the United Nations, such as its annual submission of a resolution to eradicate nuclear weapons, as the only wartime atomic-bomb victim. I am confident that making Japan, which has a track record of international contributions in not only its own region but also at the global level including Africa and the Middle East, and which proactively contributes to peace, a permanent member of the UNSC would offer a significant boost to global peace and security.

From this perspective, last month, I formed the Headquarters on Strategy for the United Nations Security Council in the Ministry of Foreign Affairs, which I am personally chairing, and Japan is already engaging in a variety of diplomatic efforts, such as dispatching State Ministers and Parliamentary Vice-Ministers for Foreign Affairs to various regions, based on discussions at the Headquarters. To promote reforms, the Headquarters is reviewing future initiatives in light of the importance of strengthening cooperation with reform proponents, including African countries that account for more than one-fourth of United Nations Member States. While UNSC reform is a very challenging issue, activities targeting the realization of text-based Intergovernmental Negotiations towards concrete outcomes of the reform started in New York on February 3 under the United Nations General Assembly. Japan intends to take a leading role in the promotion of the reform.

Although the global population living in poverty has been halved, there are still more than 800 million impoverished people, over 60 million people that have been displaced from their homes, and 125 million people, which is roughly equivalent to Japan's population, that require humanitarian assistance.

With a focus on individual people, Japan has proposed the concept of "human security" that promotes nation-building and society-building by protecting and empowering individuals, in order to free people from fear and want and enable them to live with dignity.

I would like to continue to place emphasis on the importance of "human security" and especially calling attention to the keyword "Japan working together with developing countries".

Last year, the United Nations adopted the 2030 Agenda for Sustainable Development that reflects Japan's concept of human security. This year is the first year for implementing this Agenda. The guiding principle of the 2030 Agenda is "leaving no one behind." It is necessary for all United Nations Member States, including developed countries, to implement this agenda and build partnerships with all stakeholders, including international organizations, NGOs, and private-sector companies.

For example, in Ethiopia, where I visited, the "Kaizen" method cultivated at Japan's manufacturing sites has been introduced and Ethiopians are trying to enhance their productivity.

The United Nations will host the World Humanitarian Summit in May 2016, with the aim of holding discussions on the future of humanitarian action among various stakeholders including member-country governments, NGOs, think tanks, and private companies. Japan will actively contribute to the success of this meeting as the first major test for global efforts towards the implementation of the 2030 Agenda.

Development is also a major pillar of the G7 Ise-Shima Summit held in May. Cooperating with other G7 countries, Japan will address this issue especially by focusing on aspects that Japan has been leading, including the creation of a society where women succeed, quality infrastructure, and global health.

Japan has provided assistance up to now by always listening to the voices of counterpart countries and supporting their requests while placing an emphasis on their ownership. This stance of "working together with developing countries" is the essence of Japan's development cooperation.

TICAD, co-organized by Japan with the United Nations, African Union among others, has been convened five times in Japan thus far and will be held in Africa for the first time in August 2016. This is a case where Japan's cooperative stance is fully on display. Japan is promoting the UN agenda through the TICAD process by listening to African voices and working together with them. I personally participated in the TICAD Ministerial Meetings held in Ethiopia and in Cameroon as Foreign Minister and served as a Co-Chair. It is my intention to further strengthen the relations with Africa.

In this manner, I would like to implement "Japan working together with developing countries" in Japanese diplomacy.

4 Supporting activities by Japanese personnel at the United Nations

Approximately 800 Japanese people currently work at UN agencies, but this is still not enough, compared to the other G7 countries at over 1,000 people and the United Nations Secretariat's desired level. I have talked personally with these Japanese staff several times and strongly feel it is important to increase Japanese personnel. I have given instructions to further increase the dispatch of young Japanese and enhance cooperation with universities in order to achieve the goal of 1,000 people by 2025 as early as possible.

In this landmark year of its 60th anniversary as a United Nations Member State, Japan is actively striving to realize its own national interests and common interests with the international community by maximizing its utilization of the United Nations as a forum. I would also like to emphasize "Japan working together with developing countries". I believe that steadily building up these initiatives will make the case for promotion of UNSC reforms and Japan's entry as a UNSC permanent member more persuasive.

As foreign Minister, I intend to utilize valuable opportunities offered by the United Nations, the G7 Summit, and TICAD VI and also go beyond forum boundaries to continuously address various issues facing the international community.

Page Top
Back to Speeches by the Foreign Minister