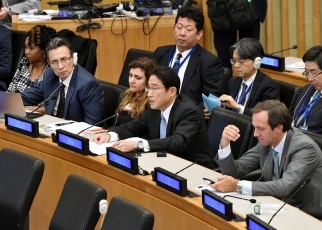 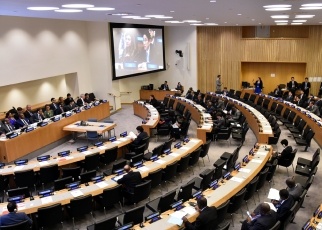 2. Minister Kishida mentioned the discussion that he led at the Open Debate of the Security Council on the theme of “Peacebuilding in Africa” in July, which he chaired, and he emphasized the Government of Japan’s initiatives in the field of peacebuilding. Minister Kishida also emphasized the importance of using innovative approaches such as coordination between industry, government, and academia in order to secure funding for the PBF’s activities in the future.

3. In addition, Minister Kishida explained that the word “Peace” possesses a special meaning for Japan and that Japan intends to materialize the idea of “proactive security” in a concrete manner while maintaining its fundamental position as a peaceful nation. Minister Kishida announced that Japan will contribute about 10 million dollars in the coming years to the PBF in order to renew its commitment to the Fund.

4. In addition to Minister Kishida, this Conference was attended by Mr. Ban Ki-moon, Secretary-General of the UN, and the representatives of more than 30 countries, and as a result of 26 countries pledging contributions, in total approximately 150 million dollars of contributions were promised.