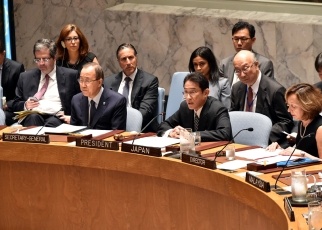 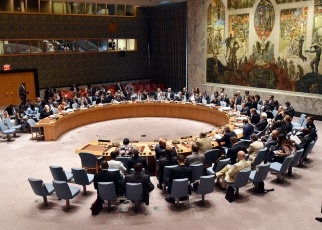 I shall now make a statement in my capacity as the Minister for Foreign Affairs of Japan.

Let me begin by expressing my deep appreciation for the informative and insightful briefings just given by the Secretary-General Ban Ki-moon, Ambassador Amina of Kenya, and Commissioner Smail Chergui of the AU. I would also like to thank the Ministers of Angola, France, Malaysia and Senegal for their presence today.

At the outset, we might want to ask ourselves why we need to discuss “Peacebuilding in Africa”. The answer is quite straightforward. Africa and its people possess rich culture and traditions, as well as huge potential for future growth. But there are African countries which are suffering from conflicts, confrontations and terrorism.

As we know, the Republic of South Sudan has been facing grave challenges. Japanese peacekeepers are working alongside international forces in UNMISS, which was originally mandated to support peace consolidation efforts to foster state-building, with emphasis on institution building.  In light of the changes on the ground, UNMISS now focuses on protection of civilians and other urgent tasks. We need to pool our collective wisdom in order to engage in institution building in countries where confrontation persists.

During this Open Debate, I would like to encourage the distinguished delegates to focus on the significant role played by institution building, particularly in conflict prevention. I look forward to pragmatic discussions which may show us the way forward while considering lessons learned.

Now, let me touch upon Japan’s three principles on peacebuilding in Africa.

Firstly, the emphasis on people and the field. We move forward together with local populations, empowering the people on the ground.

Secondly, we put emphasis on improving living standards through inclusive economic development, which serves as the basis of peace.

The third principle is tolerance of diversity. While emphasizing universal values, Japan also respects the importance of ethnic diversity and local ownership, and is cautious not to rush to quick results.

These principles are in line with the basic philosophy of the Tokyo International Conference on African Development (TICAD) process; ownership and partnership. TICAD VI, which will be held in Kenya this August, will be a good opportunity to promote peacebuilding in Africa via development. Japan will continue to engage with Africa through an open process of TICAD, based on a broad partnership with the UN and other international bodies.

Firstly, the focus of our support is institution building in Africa, while also respecting the continent’s diversity, unique characteristics, and traditional institutions. In Chad, Japan has supported enhanced administration of electoral institutions, as well as the design of systems to manage election-related disputes. In this context, it is useful to collaborate with regional organizations with deep understanding of the local context.

Secondly, we support capacity building for the people who actually run the institutions. In order to eradicate violence and terror, we need to train the police forces in communities. Japan has supported a police training program in the Democratic Republic of the Congo (DRC) for more than twenty thousand police officers. In addition, Japan will cooperate with the Asian-African Legal Consultative Organization (AALCO) to promote capacity building for legal institutions.

Thirdly, in order to sustain peace, we need to build trust in addition to institutions. In Côte d’Ivoire, Japan has supported strengthened capacity of the administrative services, with an eye towards social integration, in order to restore trust between administration and the people.

Lastly, we need innovation in peacebuilding methods. There is ample room for expanded use of science and technology. In North Africa, Japan has supported the installation of high-tech surveillance cameras to improve security and border control. Japan also contributes to peacebuilding in Africa through expanded training of industry professionals, and coordination between industry, government, and academia.

In order to promote peacebuilding, enhanced cooperation for countering terrorism is critical. To strengthen counter-terrorism capacity in Africa, I would like to announce here that Japan will implement the assistance of one-hundred and twenty million US dollars including human resource development of thirty-thousand people from 2016 to 2018. The purpose of this assistance is to strengthen capacity for information and data collection in Africa, for border control at international airports with cutting edge technologies, and for security maintenance including criminal justice enforcement and capacity building of police forces.

We need to break down silos in order to achieve a seamless transition of peacebuilding. The entire UN system, national governments, civil society and all related actors need to work together over the long term.

As a Foreign Minister who comes from Hiroshima, peace is particularly close to my heart. After the Second World War, Japan succeeded in re-building its institutions by learning from foreign countries while also maintaining the best parts of its traditional institutions. We will continue to reflect on our experience as we make further efforts for the peacebuilding in Africa.

I would like to conclude my remarks by reiterating Japan's strong commitment to contribute to the peace and security of Africa. We will also fully utilize the views expressed in today's debate at the upcoming TICAD VI summit in Nairobi and beyond.