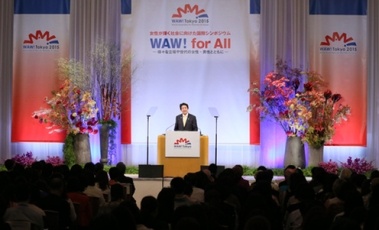 1. The World Assembly for Women: WAW! 2015 was held in Tokyo on August 28 and 29 in order to further promote the realization of ‘A Society where Women Shine,’ which Japan is engaged in at home and abroad. Approximately 150 leaders and others active in women-related fields from approximately 40 countries and eight international organizations participated, including H.E. Mrs. Ellen Johnson Sirleaf, President of the Republic of Liberia, the first popularly-elected female president in Africa. WAW! 2015 was attended from Japan by Mr. Shinzo Abe, Prime Minister, Mr. Fumio Kishida, Minister for Foreign Affairs, Ms. Haruko Arimura, Minister in Charge of Women's Empowerment, Mr. Katsunobu Kato, Deputy Chief Cabinet Secretary, Mrs. Akie Abe, spouse of the Prime Minister, and others.

2. This year is the second year the Assembly has been held, and it was held with the goal of having women and men from diverse backgrounds and generations consider and take action together on the theme of “WAW! for All.” Broad-ranging participation was achieved that included senior leaders in various fields through to young people, and discussions were held on issues in a variety of areas, such as the economy, society, education and peacebuilding.

3. On August 28, at the beginning of the symposium, Prime Minister Abe emphasized that the time has now come for concrete debate not on “why we need to promote women’s participation in society” but on “how we achieve it.” He introduced developments such as the enactment of a new bill to promote women’s participation, and in the field of international cooperation he also mentioned cooperating with UN Women and other organizations in order to realize a society free of human rights violations. Furthermore, he announced the implementation of over 42 billion yen of assistance in the field of girls and education over a three-year period, and expressed Japan’s intention to attach importance to themes such as women and the natural sciences and technology, girls’ education and other kinds of empowerment, women and health, and women and entrepreneurship when it assumes the G7 presidency next year.

4. At the High-Level Round Table on August 29, lively discussions took place on the two themes of “Women and the Economy” and “Global Issues,” and concrete proposals were put forward by participants.

5. In relation to “Women and the Economy,” discussions took place on methods for enabling work-life management, methods for promoting reforms that include contributions from men, and challenges on both the systems and awareness fronts, in order to support participation by women. Proposals that were put forward for overcoming long working hours and creating a conducive working environment for both men and women included approaches that make effective utilization of ICT (including ICT utilization by senior management), flexible working arrangements that do not adhere to the concept of regular working hours, the adoption of a results-oriented approach, and career advancement, and it was also proposed that senior management support these initiatives. The importance of entrepreneurship and the necessity for supporting it was also pointed out.

6. The Round Table also focused on the difficulties faced by single mothers, the adverse treatment due to factors such as pregnancy or childbirth (so-called maternity harassment), and the realities of women who are the victims of sexual harassment. Concrete support measures that the government, regional municipalities, and companies and citizens’ groups can take were explored, and proposals on eliminating prejudice toward single mothers, the effectiveness of posing problems through Social Networking Services (SNS) etc., and raising awareness of the support programs that can be utilized were presented.

7. In relation to “Global Issues,” from the viewpoint that education is the key to empowering women participants pointed out the importance of popularizing secondary education, not only elementary education, eradicating social norms which prevent girls’ schooling, changing mentalities of families, men, and boys, and so on, in order for women to assume positions of leadership. Additionally, given that long commutes to school in developing countries are one reason why girls become unable to attend school, specific proposals such as building schools close to resident areas were presented.

8. Furthermore, based on the fact that women are the biggest victims in conflicts, the importance of taking into account needs that are unique to women was raised, including developing legislation that encourages economic independence for widows. The importance of ensuring women are active participants in the peacebuilding and recovery processes was raised, and specifically, it was proposed that the number of women in the security field, such as Peacekeeping Operations (PKO) personnel, be increased, and training be implemented to that end. In addition, in light of the new challenges the international community is facing from the rise of extremism, for example, the view that government, international organizations, regional municipalities, companies, civil society and other entities should coordinate together and strive to protect the rights of women under a comprehensive approach was supported.

9. In addition to these discussions, at the Special Sessions that were newly established this year, the spotlight was put on the role that preparing a safe, secure and comfortable sanitary environment plays in improving women’s safety and status and improving their lifestyle quality, and the latest initiatives were also introduced.

10. Additionally, from the viewpoint of promoting active participation by women researchers in the field of natural science, which is important to addressing global challenges such as climate change, infectious diseases and disaster reduction, the need and the challenges for further increasing the number of women studying natural science at university and supporting women researchers active at the front line were discussed.

11. In addition to this, initiatives for supporting women entrepreneurs in Asia and specific ways for women to participate and exercise leadership in disaster reduction, the importance of which was noted in the “Sendai Framework for Disaster Risk Reduction 2015-2030” formulated at the United Nations World Conference on Disaster Risk Reduction in March this year, were discussed.

12. Furthermore, a Youth Table was set up at this year’s WAW!, and ideas on building a richly diverse society in which everyone, men and women, can shine were presented by young people, in whose hands the future lies.

13. In the Closing Session, the rapporteurs from each session gave reports that included specific proposals, and it was decided that the proposals presented in the High Level Round Table discussions will be collated and formulated as this year’s ‘WAW! To Do 2015’ compilation of proposals, in one week.