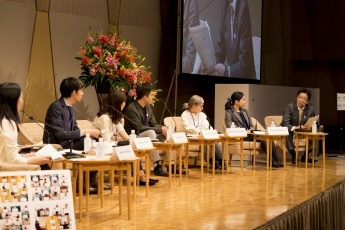 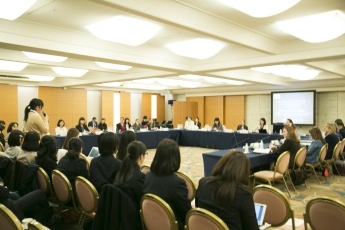 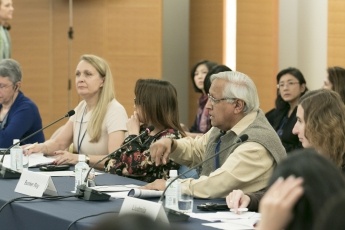 2  In opening session, Minister Kato touched upon his passion that he has had since the time when he led the 1st and 2nd WAW! as Deputy Chief Cabinet Secretary, and presented concrete actions for reforming working-style which he is in charge as a minister,
such as efforts to address long working hours, to realize equal pay for equal work, and to make the environment in which women can play an active role. He also introduced the visualization of information regarding women's active engagement in public and private sectors under the the Act on Promotion of Women's Participation and Advancement in the Workplace, which was fully enforced in April 2016, and the initiative to add evaluation points, as incentives, on companies promoting work-life balance in the government procurements, and he explained the progress in women's active engagement in Japan. In addition, on Japanese efforts at international community, he mentioned about discussion and outcomes on women issues at Ise-Shima Summit, the first summit after SDGs was launched, and at related ministers' meetings. In light of "Development Strategy for Gender Equality and Women's Empowerment" which was released before the Ise-Shima Summit, he also stated that Japan will continue to contribute to women's active engagement including promotion of SDGs in the international community.

3  Ms. Helen Clark, the administrator of UNDP (United Nations Development Programme), introduced current situation and challenges of SDGs' goal concerning women such as challenge in women's participation and leadership not only at companies but also in the field of politics and administration, hardship in women's employment including unpaid work, current situation of violence against women, women's sexual and reproductive health and rights etc, and she called for strengthening active actions to realize SDGs. Ms. Fumiko Hayashi, mayor of Yokohama city of Japan, introduced concrete examples of efforts such as transformation of mindset among staff/employees and their capacity development based on her experience as a mayor and also as the first female CEO in four companies, and emphasized the importance of active leadership in such efforts.

4  Five high-level round tables on "Developing Capacity of Women and Promoting Their Active Roles in Science, Technology, Engineering and Mathematics (STEM)", "Promoting Women's Leadership", "Work-Life Management 2.0", "Women's Well-being -Especially Improving Sexual and Reproductive Health and Rights-" and "Participation and Empowerment of Women in Peace and Security" were held in the morning and afternoon for 3 hours in total. Special session in the morning focused on youth, while afternoon session was about innovation from local communities. Recommendations from each session are as follows.

（1）Developing Capacity of Women and Promoting Their Active Roles in Science, Technology, Engineering and Mathematics (STEM) （2）Promoting Women's Leadership （3）Work-Life Management 2.0 （4）Women's Well-being -Especially Improving Sexual and Reproductive Health and Rights- （5）Participation and Empowerment of Women in Peace and Security  （6）Special Session 1: Gender Equality from Youth Perspective （7）Special Session 2: Innovation from Local Communities: Toward Society where Women "Truly" Shine 5 At lunch meeting, Ms. Akie Abe, the spouse of Prime Minister of Japan, stressed the importance of maximizing women's power to connect with others to make peace in the divided societies in her remarks.

6 On the closing session, Minister Dorji Choden, Minister for Works and Human Settlement of Bhutan, and Mr. Raimo Parssinen, Member of Parliament in Sweden, made remarks respectively. Ms. Dorji Choden mentioned that women's promotion is not for competing against men, but building equal partnership, and that perspective is crucial in terms of development. At the same time, she also stressed the importance to enforce women's health and women's promotion in both public and private sectors with emphasizing the importance of raising awareness as discussed throughout WAW! Mr. Raimo Parssinen stated the importance of sharing perspectives in the international community that gender equality is indispensable for economic growth and prosperity by introducing efforts and achievement of Sweden's efforts in gender equality in the political sphere. Then, rapporteurs from five high-level round tables and 2 special sessions presented discussion summary with suggestions. Lastly, Mr. Kimihiro Ishikane, Deputy Vice-Minister for Foreign Policy summarized whole discussion or WAW! and asked participants share many suggestions at WAW! 2016 in their home country and their own organizations and make further action together with Japan.