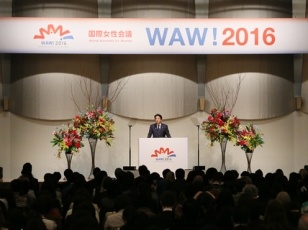 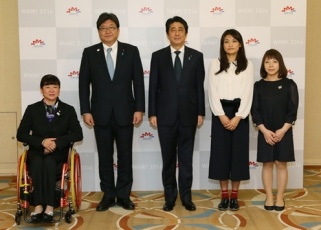 2. This is the third time to hold WAW!. WAW! is one of the Japanese government's effort to realize a "society where women shine", which is one of the Abe Administration's top priority. This year's theme was "WAW! for Action". In light of the fact that 2016 has been a year of ACTION for Japan and the World, as in the case of the full enforcement of the Act on Promotion of Women's and Advancement in the Workplace in Japan and the very first year to implement Sustainable Development Goals (SDGs) that calls for gender equality and women empowerment, WAW! aims to learn together about actions and lessons on promoting women's participation around the world and lead to further accelerate next year's action.

3. At the outset of the Public Forum, Prime Minister Abe delivered a speech about a change in "attitudes" through "action" and aiming for a society in which all people can participate in their own way without constraints in light of this year's theme of WAW! for Action. In particular, he touched upon Japan's specific initiatives and the direction in which Japan should head with the international community regarding following three themes that WAW! would like to shed light on this year, namely "promotion of working style reforms," "women's participation in decision-making and leadership," and "building peaceful and safe society by women". Finally, he said his passion he demonstrated in putting efforts into the women's agenda as chair at the G7 Ise-Shima Summit will continue, even though his role as G7 chair has completed, and he promised to steadily implement over US$ three billion in total assistance for women in developing countries by 2018.

4. This was followed by a keynote speech by Ms. Marne Levine, Chief Operating Officer (COO) of Instagram. Ms. Levine offered novel proposals on work-life management and efforts to promote women in society, such as making the work environment for women more flexible through advancement of technology, and encouraging all women, not only executive level women, to believe in their own strength and create new horizons for involvement in society, in light of her own experiences and initiatives.

5. Mr. Sadayuki Sakakibara, Chairman of Keidanren, and Ms. Yuriko Koike, Governor of Tokyo, gave remarks respectively. Mr. Sakakibara praised Prime Minister Abe for his strong leadership to promote active engagement of women, noted the business community also considers women's participation as an important "management strategy," and introduced specific examples. Governor Koike touched upon on various issues such as the current state of diversity, speedy responses to the issue of children waiting for nursing care vacancy, realization of "life-work balance" that she is promoting as Governor as work style reform, reforms in the mentality of women themselves, and others.

6. Ms. Aung San Suu Kyi, State Counsellor and Foreign Minister of the Republic of the Union of Myanmar, sent a video message to WAW! In her message, State Counsellor Aung San Suu Kyi spoke about major progress in improving the status of women, including education, but also noted that women still face wide-spread physical and sexual violence and harsh working environments, and stressed the importance of working together to move beyond stereotype and be creative so that women can utilize their capabilities to achieve successful lives.

7. First panel discussion titled "Building Peace in Society by Women" were moderated by Ms. Marri?t Schuurman, NATO Secretary General's Special Representative for Women, Peace and Security, and participated by Ms. Awut Deng Acuil, Minister of Gender, Child and Social Welfare of the Republic of South Sudan; Ms. Sreytouch Sun, who works at the Cambodia Office of the International Committee of the Red Cross; and Ms. Sokchan Sieng who is also from Cambodia as discussants. The panel held a lively discussion on women's participation in the area of "women, peace, and security" while acknowledging tougher challenges faced by women and persons with a disability, under the enthusiasm of not accepting these as barriers to be successful and instead contributing to realization of goals and lives that women themselves hope to achieve.

8. Ms. Phumzile Mlanmbo-Ngcuka, Executive Director of UN Women, also made her remarks. She said that Japan has been the closest partner for UN Women, recognized Prime Minister Abe as a HeforShe IMPACT Champion, and discussed various issues as responses to violence against women, the importance of women in SDGs, promotion of participation in STEM areas, the effects of economic empowerment of women including realization of equal pay for equal work, promotion of gender equality by encouraging women to participate in sports, and improvement for women's leadership.

10. The Public Forum was attended roughly by 800 audiences, including general public.