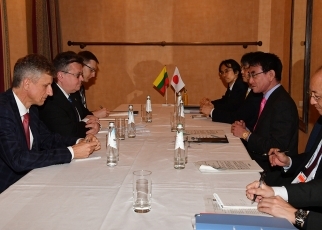 On February 15, commencing at 6:30 p.m. for approximately 30 minutes (local time; 2:30 a.m. on February 16, Japan time), Mr. Taro Kono, Minister for Foreign Affairs, held a Foreign Ministers’ Meeting with H.E. Mr. Linas Linkevicius, Minister of Foreign Affairs of the Republic of Lithuania, during his visit to Germany to attend the Munich Security Conference. The overview of the meeting is as follows.

In opening remarks, Minister Kono stated that Lithuania is an important partner sharing fundamental values with Japan, including the rules-based international order, free trade, democracy, human rights and the rule of law, and expressed Japan’s intention to further strengthen relations with Lithuania in a wide range of areas and to work closely together with Lithuania in addressing the various issues our region and the international community face.

(1) The two Ministers shared the view that the international community should be united in supporting the U.S.-North Korea process, towards the 2nd U.S.-North Korea Summit, scheduled to be held in the end of this month, and confirmed that Japan and Lithuania will closely cooperate on this issue.
(2) Furthermore, the two Ministers exchanged their views on other various regional affairs.