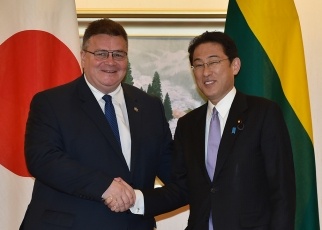 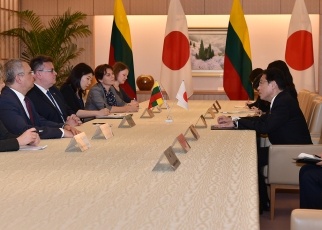 On May 10, commencing at 4:25 p.m. for approximately 30 minutes, Mr. Fumio Kishida, Minister for Foreign Affairs, held a foreign ministers' meeting with H.E. Mr. Linas Linkevičius, Minister of Foreign Affairs of Republic of Lithuania. The overview of the meeting is as follows.

1 Beginning and bilateral relations
(1) At the beginning, Minister Kishida once again welcomed Minister Linkevičius' visit to Hiroshima and the opening of the Honorary Consulate of Lithuania in Fukuyama. Furthermore, Minister Kishida noted that Japan and Lithuania shared values such as the rule of law, and stated that the number of Japanese visitors to Lithuania was increasing partly as a result of growing interest in Mr.Chiune Sugihara, and that he hoped to capitalize on this momentum to strengthen the relationship between the two countries.

(2) In response, Minister Linkevičius stated that he was happy to meet Minister Kishida again, and that he had visited eight cities on this trip, including Hiratsuka City. He further explained that during his visit to Hiroshima he had had a chance to listen directly to the experience of atomic bomb survivors, which had left a very deep impression on him. Minister Linkevičius also mentioned that he hoped to further develop the bilateral relations in a broad range of fields, including politics and economy, as well as education and science.

(3) The two ministers touched on the ASEM Conference on Women's Empowerment that would be jointly hosted by the nine Asia-Europe Meeting (ASEM) member countries, including Japan and Lithuania, and shared the view that they would also collaborate in this field.

2 Japan-Europe cooperation
Minister Kishida stated that Japan intended to continue to keep the flag of free trade waving high together with Europe, and the two ministers shared the view that they would continue to work closely together with the aim of reaching an agreement in principle on the Japan-European Union (EU) Economic Partnership Agreement (EPA) as early as possible.

3 Regional affairs
(1) The two ministers acknowledged that North Korea represented a new level of threat, and shared the view that they would work closely together to ensure strict and complete fulfillment of the relevant United Nations Security Council (UNSC) resolutions to increase pressure on North Korea by the international community as a whole. Additionally, Minister Kishida requested Lithuania's understanding and support for promptly resolving the abduction issue.

(2) The two ministers also exchanged views on the situation in East Asia and Russia.