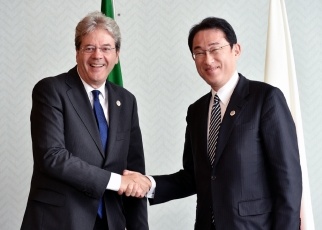 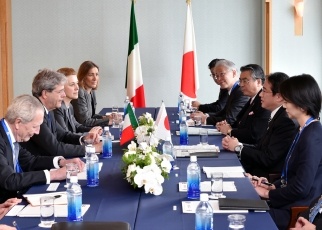 On Sunday, April 10, commencing at around 10:45 a.m. for approximately 35 minutes, Mr. Fumio Kishida, Minister for Foreign Affairs, held a meeting with H.E. Mr. Paolo Gentiloni, Minister for Foreign Affairs and International Cooperation of Italy, on the occasion of the G7 Hiroshima Foreign Ministers' Meeting. The overview of the meeting is as follows.

(1)Minister Kishida welcomed Minister Gentiloni to Japan, and expressed his intention to lead the G7 Hiroshima Foreign Ministers' Meeting to success, starting on that day, in close cooperation with Italy which would hold the G7 Presidency next year.

(2)Minister Gentiloni expressed his pleasure to be able to visit Hiroshima, which is Minister Kishida's hometown, and stated that it was important to send a message toward peace, under the current global circumstances.

(3)Both ministers affirmed that at the G7 Hiroshima Foreign Ministers' Meeting, they would hold strategic discussions on the issues facing the international community, such as countermeasures against terrorism and violent extremism, the refugee issue, disarmament and non-proliferation, and maritime security, as well as regional situations, such as North Korea, China, Russia and Ukraine, and the Middle East. Furthermore, both Ministers agreed to closely cooperate for the success of the G7 Hiroshima Foreign Ministers' Meeting and the G7 Ise-Shima Summit.

Both ministers shared the view that they would work together to strengthen Japan-Italy relations in a broad range of fields, including political, economic, and cultural affairs, in this milestone year of the 150th anniversary of the establishment of diplomatic relations between Japan and Italy.

3 Situation in Ukraine and Russia

Both ministers shared the view that the full implementation of the Minsk Agreements by both Russia and Ukraine was essential for improving the situation in Ukraine. In relation to Russia, they affirmed the importance of maintaining dialogue while continuing to impose sanctions.

(1)Minister Kishida offered his condolences for an Italian casualty in the recent terror attacks in Brussels and explained that Japan, as the country holding the G7 Presidency, would continue to proactively tackle countermeasures against terrorism and violent extremism, in cooperation with Italy and the rest of international community.