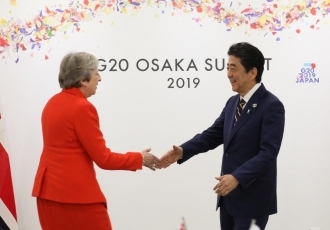 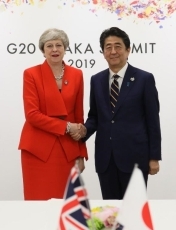 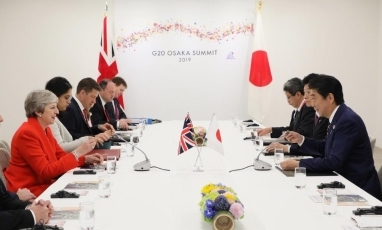 Japan-UK Summit Meeting (Photo: Cabinet Public Relations Office)
On June 28th, commencing at 11: 05 a.m. for approximately 20 minutes, Mr. Shinzo Abe, Prime Minister of Japan held a summit meeting with the Rt Hon Theresa May MP, Prime Minister of the United Kingdom, who is visiting Osaka to attend the G20 Osaka Summit. The overview of the meeting is as follows. In addition to the two leaders, the meeting was attended, on the Japanese side by Mr. Taro Kono, Minister for Foreign Affairs, and Mr. Yasutoshi Nishimura, Deputy Chief Cabinet Secretary, among others, and on the UK side, H.E. Mr. Paul MADDEN, British Ambassador to Japan, and others.

The two leaders shared the view that Japan and the UK would work closely to send out a strong and unified message regarding important global challenges such as trade, digital economy and the environment, towards the success of the G20 Osaka Summit, which commenced today.

(1) The two leaders welcomed the steady progress of Japan-UK cooperation towards the realization of a free and open Indo-Pacific.

(2) With regard to the EU’s import restriction on Japanese food and feed, Prime Minister Abe requested the UK’s cooperation for an early realization of the easing of the restriction, which was proposed by the European Commission to the EU Member States.

(3) The two leaders also exchanged their views on the situation of Iran.