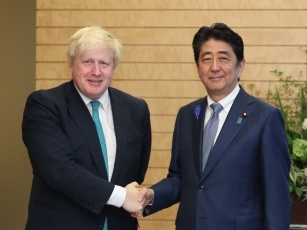 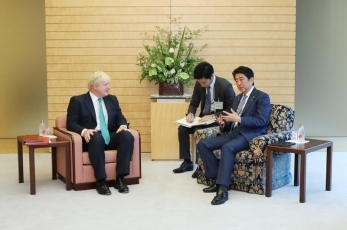 On July 21, commencing at 4:25 p.m. for approximately 20 minutes, Mr. Shinzo Abe, Prime Minister of Japan, received a courtesy call from the Rt Hon Boris Johnson MP, Secretary of State for Foreign and Commonwealth Affairs of the United Kingdom, who is visiting Japan. The overview is as follows.

1. Prime Minister Abe welcomed Secretary Johnson’s first visit to Japan as Secretary of State for Foreign and Commonwealth Affairs. Prime Minister Abe stated that he understood the Japan-U.K. Foreign Ministers’ Strategic Dialogue held on the same day was meaningful, and explained that he would like to further strengthen global strategic cooperation between Japan and the U.K. for the peace and prosperity of the international community. In response, Secretary Johnson stated that the U.K. would stand up with Japan against the threat of North Korea. Secretary Johnson also welcomed the agreement in principle on the Japan-European Union (EU) Economic Partnership Agreement (EPA), and stated that the U.K. would like to build new economic relationships with EU member countries and other friendly countries.

2. Prime Minister Abe welcomed agreements in principle on the Japan-EU EPA and Strategic Partnership Agreement (SPA), and stated that he would like to obtain cooperation by the U.K. toward promptly bringing the agreements into effect. Furthermore, Prime Minister Abe explained that he was closely watching the U.K.’s negotiations to exit the EU, and requested consideration for private companies to minimize the impact on them. In response, Secretary Johnson stated that the U.K. would appreciate investment from Japan to be continued, and both sides shared the view that they would continue to promote free trade.

3. Both sides shared the view that North Korea constituted a new level of threat, and confirmed the necessity to increase pressure on North Korea as well as the importance of China’s role. They also agreed that they would work together toward the prompt adoption of a new United Nations Security Council resolution.