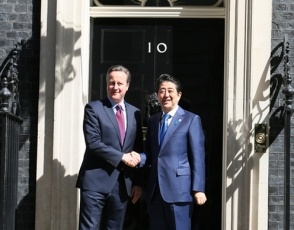 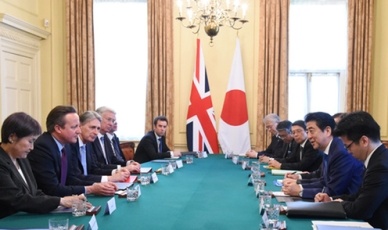 On May 5, commencing at 10:50am for approximately 1 hour, Mr. Shinzo Abe, Prime Minister of Japan, held a Japan-UK summit meeting with the Rt Hon David Cameron MP, Prime Minister of the United Kingdom of Great Britain and Northern Ireland, at the UK Prime Minister’s office. The outline of the meeting is as follows. 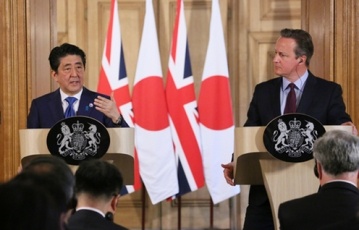 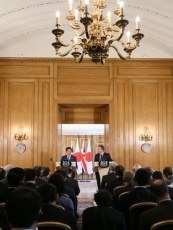 (1) Prime Minister Cameron welcomed Prime Minister Abe’s third visit to the UK and stated that he would like to exchange views toward the G7 Ise-Shima Summit and discuss strong bilateral relations, including in economy, security, and other areas. He also expressed his condolence to the victims of the earthquake in Kumamoto Prefecture and offered cooperation.

(2) Prime Minister Abe expressed his gratitude for the words of condolences. He stated it was a pleasure to meet Prime Minister Cameron on the day of the country’s regional elections, an important day for the UK. He also hoped to make the G7 Ise-Shima Summit a success by cooperating closely with Prime Minister Cameron and to further develop the strong Japan-UK partnership through this visit.

(1) Prime Minister Abe stated that he would like to have strategic discussions that are appropriate for the G7, which share values, and a strong message on the global economy and the response to terrorism and the refugee issue, which are the primary themes at the G7 Summit. Prime Minister Cameron agreed with these points.

(2) Regarding the global economy, the two leaders shared their views that the G7 should lead sustainable and robust growth of the global economy and that cooperatively promote monetary policy, flexible fiscal stimulus, and structural reforms in a balanced manner, reflecting the circumstances in the respective countries.

(3) The two leaders also shared their views that addressing terrorism and violent extremism was a top priority issue where the G7 should take the lead.

(1) Regarding the EU referendum in the UK, Prime Minister Abe, while stating that this would be a matter to be decided by the British people, explained that it would be better that the UK remains in a strong EU and that British membership in the EU would be best for Japanese investments in the UK, and conveyed his view that it would be desirable for Japan that the UK stays in the EU, from the standpoint of Japan’s national interests. Prime Minister Cameron, who supports UK’s staying in the EU, expressed his gratitude for these comments. 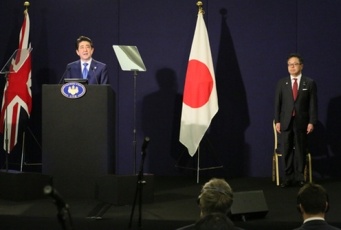 (1) Prime Minister Abe appreciated the view of the UK on Japan as “the closest security partner in Asia” and hoped to further promote Japan-UK cooperation. Prime Minister Cameron agreed with this view.

(2) The two leaders appreciated the progress of the relations between Japan and the UK, which are Dynamic Strategic Partners (PDF)

, and confirmed their intent to further promote cooperation in a wide range of areas, including the economy and security and defense.