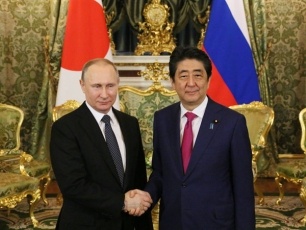 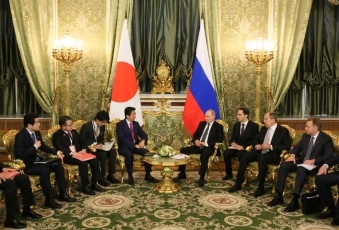 Based on the outcomes of President Putin’s visit to Japan in December last year, the two leaders held a candid discussion covering a wide range of fields, including the issue of concluding a peace treaty, international affairs (including Syria and North Korea), economic relations, and cultural and people-to-people exchanges.

The leaders reached a shared view on the following three points as specific progress with the matters agreed upon at the summit meeting in December last year:

(1) To realize special grave visits by former residents of the Northern Territories by airplane (to be implemented as early as June).

(2) To send a joint public and private research team on the joint economic activities to the four islands (to be implemented as early as May).

(3) To establish additional entry/exit points when grave visits to the Habomai Islands take place at the end of August this year.
Giving Japanese citizens and Russian citizens currently living on the four islands a genuine sense that various outcomes will be achieved by cooperating on the four islands through these efforts will promote understanding of the significance of resolving the peace treaty issue, and is a part of the process toward concluding the peace treaty.

The two leaders shared the view that they will meet again on the occasion of the G20 Summit Meeting that will be held in Hamburg, Germany on July 7 and 8.
Prime Minister Abe once again mentioned that he is scheduled to attend the Eastern Economic Forum that will take place in Vladivostok in September.
Prime Minister Abe stated that he also hopes to realize a co-chairs’ meeting of the Japan-Russia Intergovernmental Commission on Trade and Economic Issues between Mr. Fumio Kishida, Minister for Foreign Affairs, and Mr. Igor Shuvalov, First Deputy Prime Minister of Russia, at an appropriate time in the future.

(1) Counterterrorism
Prime Minister Abe once again expressed his condolences over the Saint Petersburg Metro bombing, and explained that Japan intends to cooperate on dealing with non-traditional threats, including through counterterrorism.
The two sides confirmed further progress with the “Domodedovo Project,” a cooperative project between Japan and Russia to train drug enforcement agents in Afghanistan and Central Asia.

(2) North Korea
Prime Minister Abe urged Russia, which is a permanent member of the UN Security Council (UNSC) and a member of the Six-Party Talks, to play a constructive role, and the two sides affirmed that Japan and Russia will cooperate on the North Korea problem, including at the United Nations (UN).

(4) Ukraine
Prime Minister Abe stated that implementing the Minsk Agreements is the only path to improving the situation, and he urged all the parties concerned, including Russia, take constructive action.

4. Economy, and cultural and person-to-person exchanges

(1) Economy
With regard to cooperation in medical care and urban environment, which has been taking shape in the eight-point cooperation plan, Prime Minister Abe presented audio-visual materials to President Putin on the progress and advantages of cooperation in these fields. The two leaders shared the view on further realization of the cooperation plan, and development of a mutually beneficial economic relationship between Japan and Russia. The two leaders welcomed a revision to the work plan on the cooperation plan and the signing of 28 documents including the agreement between Yamaguchi Prefecture and the Krasnodar region, as well as the agreement in principle in the negotiations for the amendment of the current Tax Convention between Japan and Russia.

(2) Cultural and people-to-people exchanges
With regard to the “Japan Year in Russia” and “Russia Year in Japan” in 2018, the two leaders confirmed that coordination will take place toward a common opening event next year, co-hosted by Japan and Russia, and instructed that the events be expanded.
Prime Minister Abe welcomed that Japan was chosen as the first country where “Russian Seasons” would take place, as an embodiment of the importance that is attached to Japan-Russia relations. The festival was initiated by the President Putin to showcase Russian culture.
Prime Minister Abe explained that he will attend the opening ceremony on June 4.