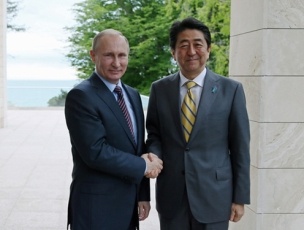 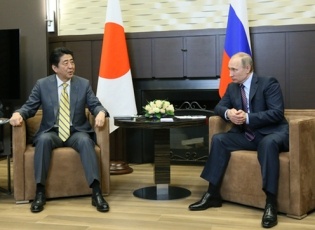 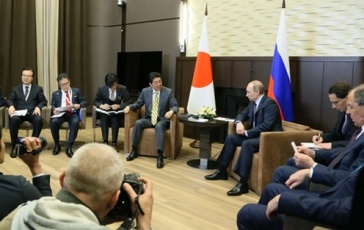 On Friday, May 6, for approximately three hours and 10 minutes, Mr. Shinzo Abe, Prime Minister of Japan, held the Japan-Russia Summit Meeting with Mr. Vladimir Vladimirovich Putin, President of the Russian Federation, during his unofficial visit to Sochi, Russia. Commencing at 3:50 p.m., the two leaders conducted a summit meeting for approximately two hours (including a 35-minute session between the two leaders just with interpreters) and then participated in a working dinner for about one hour and 10 minutes.

(1) The two leaders conducted an in-depth exchange of opinions on the Northern Territories issue. As a result, they shared the view that the two countries should actively proceed with negotiations toward the formulation of solutions acceptable to both sides through a new approach that is not stuck in a traditional way of thinking in order to overcome the current negotiation stalemate and make a breakthrough. They agreed to negotiate from a future-oriented standpoint, taking into account not only the bilateral perspective between Japan and Russia, but also a global perspective, and to implement the next round of peace treaty negotiations based on this approach during June in Tokyo.

(2) In this regard, Prime Minister Abe noted that in order to maintain a calm negotiating climate both Japan and Russia should take into consideration national sentiment on both sides and avoiding actions and comments that hurt the other side’s national sentiment.

(1) The two leaders agreed to actively engage in high-level political dialogue and visits, and to continue leader-level dialogue, with utilizing opportunities at various international conferences. In reaction to President Putin’s invitation to the Eastern Economic Forum being held in Vladivostok in September, Prime Minister Abe accepted it, and the two leaders agreed to hold another summit meeting at that time.

(2) The two leaders confirmed their intention to proceed with preparations on President Putin’s visit to Japan and agreed to look for the most suitable timing during the process of preparing for a meaningful visit.

3. Bilateral relations for the economy, security, and cultural and people-to-people interactions

The two leaders praised advances in cooperation between Japan and Russia in relation to the economy, security, cultural and people-to-people interactions, and other areas. They agreed to promote this type of bilateral cooperation toward President Putin’s visit to Japan.

(ⅱ) The two leaders confirmed recent progress on cooperation projects in the areas of manufacturing, agriculture, and energy. They agreed to promote mutually beneficial cooperation while utilizing meetings such as the Japan-Russia Intergovernmental Committee on Trade and Economic Issues, the Japan-Russian Advisory Council on Modernization of the Russian Economy.

(ⅲ) Prime Minister Abe asked for Russian cooperation to ensure that Japanese fishing boats have operation opportunities by realizing alternatives of salmon and trout drift-net fishing. President Putin responded that Russia intends to closely cooperate with Japan in its consideration of the alternatives and to promote cooperation in the fishery area.

From the standpoint of fostering trust and securing transparency, the two leaders agreed to implement Japan-Russia security discussions and terrorism countermeasure discussions in the near future and to continue interactions between defense authorities, coast guard agencies, and border patrol authorities.

The two leaders agreed to increase cultural and people-people interactions. Related to people-to-people visits, Prime Minister Abe explained that Russia is a priority in Japan’s strategic review of easing visas.

The two leaders exchanged frank views regarding international affairs, including Ukraine, North Korea, Syria, Central Asia, and Afghanistan. Prime Minister Abe communicated Japan’s strong expectations for a constructive role by Russia, an important player in the international community, in dealing with a variety of global problems.

Prime Minister Abe expressed strong hope for full implementation of the Minsk Agreements by all sides and improved conditions and urged Russia to use its influence over the armed groups and contribute to improve the situation. Prime Minister Abe also explained that he encouraged Mr. Petro Poroshenko, President of Ukraine, to fully implement the Minsk Agreements when he visited Japan last month.

Prime Minister Abe noted that North Korea started a Congress of the Workers’ Party of Korea on May 6 and commented that Japan takes the continuation of provocative behavior, such as launching ballistic missiles, very seriously, that it is essential for countries to fully implement UN Security Council resolutions, and that it is important for the Security Council to send a clear and quick unified message in response to violations of the resolutions with the aim of strengthening pressure toward a comprehensive solution of the abduction, nuclear , and missile issues. President Putin stated that Japan and Russia agree in their positions toward North Korea and that North Korea’s possession of nuclear weapons and risky behavior are unacceptable. The two leaders agreed that Japan and Russia will continue to work together to dissuade North Korea from further provocative actions.

Prime Minister Abe welcome the cooperation between the United States and Russia on the “cessation of hostile actions,” expressed hope for achievement of a breakthrough in Syria’s political process through an even more constructive role by Russia, and called on Russia to exercise influence in regard to the air bombing which is likely to have been conducted by the Assad administration and damaged a hospital and killed civilians.

Prime Minister Abe emphasized that Japan is actively contributing to the enhancement of connectivity in Central Asia through the building of a logistics network and the realization of the goal of interrupting terrorism and drug trafficking and expressed interest in cooperation between Japan and Russia in this region as well. He also explained that Japan is a major donor country to Afghanistan and that it is engaged in various types of cooperation for anti-drug measures and has been expanding cooperation with Russia in this area to Central Asia from this year. President Putin highly praised these collaborative efforts.