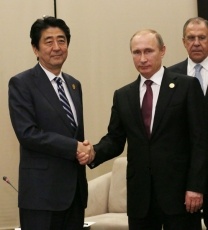 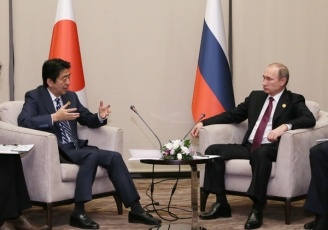 On November 15, commencing at 8:10 p.m. (local time) for approximately 30 minutes, Mr. Shinzo Abe, Prime Minister of Japan, held a Japan-Russia summit meeting with Mr. Vladimir Putin, President of the Russia Federation, during his visit to Antalya, Turkey, to attend the G20 Summit. The overview is as follows.

(1) President Putin expressed his hope that following Foreign Minister Kishida’s visit to Russia in September, the various cooperative ventures and contact between Japan and Russia, including in economic areas, will continue and be further developed, and stated that he is pleased to meet again with Prime Minister Abe this month following their summit meeting in September in New York.

(2) Prime Minister Abe responded that he too is pleased that they are able to coordinate their schedules and meet again, and that he first would like to once again express his condolences for the many Russian citizens who lost their lives in the recent crash of a commercial aircraft in Egypt. Prime Minister Abe commented that recent relations between their two countries has become more active, and welcomed developments such as Foreign Minister Kishida’s visit to Russia, the vice-ministerial level negotiations on concluding a peace treaty, the Eastern Economic Forum, and Deputy Prime Minister Dvorkovich’s visit to Japan. Prime Minister Abe also expressed his hope to further develop Japan-Russia relations through frequent dialogue.

(1) President Putin welcomed the constructive dialogue between Japan and Russia, pointing to the launch of various projects by their two countries and also the holding of the meetings of the Japan-Russia Intergovernmental Committee on Trade and Economic Issues, and the Advisory Council on Modernization of Russian Economy. The President also stated that as Japan will become a non-permanent member of the Security Council from 2016, he intends to further cooperate with Japan in the international arena. President Putin explained that preparations to promote cooperation in various fields between Japan and Russia are being made, that inter-regional exchanges and inter-university exchanges are also important, and that the Russian Culture Festival is being continuously held in Japan. On the peace treaty negotiations, President Putin remarked that the second round of vice-ministerial level negotiations held in October were useful discussions in order for each side to understand the perspective of the other and have been very meaningful.

(2) Prime Minister Abe responded that as a non-permanent member of the Security Council, Japan will be even more actively addressing the pressing issues for the international community, and that he hopes to communicate closely with Russia. Prime Minister Abe also positively evaluated the steady progress being made in Japan-Russia dialogues and exchanges in a wide range of fields, including on the economy and security, and in cultural and people-to-people exchanges. In economic areas, the Prime Minister noted that meaningful dialogues are being held in fields such as energy saving, the urban environment, medical care, and agriculture, which are areas important to the Russian side as well. Prime Minister Abe also noted that exchanges of relevant parties between Japanese and Russian companies are becoming increasingly active, which is adding momentum to the strengthening of business relations. The Prime Minister expressed his hope that the dialogue with the President would continue based on these accumulated positive cooperative ventures and stated that the discussions between the two leaders in this form are important in order to advance Japan-Russia relations.

(3) President Putin also positively evaluated this idea. With regard to future dialogue, both leaders affirmed that based on the state of preparations, arrangements will be advanced toward President Putin visiting Japan at the most appropriate time, and that they will continue to engage in dialogue at the summit level.

3. The Issue of Concluding the Peace Treaty

Regarding the Northern Territories issues, based on the agreement concluded when Prime Minister Abe visited Russia in April 2013, there was a frank exchange of views between the two leaders toward a solution acceptable to both sides.