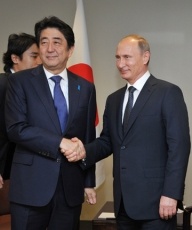 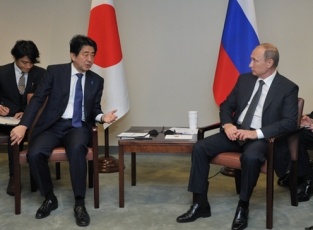 (Photo: Cabinet Public Relations Office)
On September 28, Mr. Shinzo Abe, Prime Minister of Japan, held a summit meeting with Mr. Vladimir Vladimirovich Putin, President of the Russian Federation, during his stay in New York to attend the United Nations General Assembly.
This summit meeting was the 11th meeting with President Putin for Prime Minister Abe including those during the first term of the Abe Administration.
The meeting added up to approximately 40 minutes, with a 30 minute meeting followed by 10 minutes between only Prime Minister Abe and President Putin, with just the interpreters in attendance.

1. Main Points of the Meeting

In this Japan-Russia summit meeting, frank and wide-ranging discussions were held in an close atmosphere regarding the future of the Japan-Russia relationship including the negotiations for the conclusion of a peace treaty.
The leaders shared the common understanding on the following points.
(1) Seek progress in the negotiations regarding the territorial issue to create a solution acceptable to both sides.
(2) Continue dialogue between the two leaders by holding summit meetings, utilizing the occasions of G20 and APEC meetings.
(3) Continue to look for the best timing for President Putin’s visit to Japan based on the common understanding reached between the two leaders on the occasion of the APEC meeting last November. The situations in Ukraine and Syria were also discussed.

2. The following exchange was made between the two leaders.

(2) Future dialogue between the two leaders

Prime Minister Abe expressed his desire to conduct a frank exchange of opinions including the issue of the conclusion of a peace treaty, utilizing opportunities at international meetings such as the G20 and APEC in November.

(3) The situation in Ukraine

Prime Minister Abe stated with regard to the situation in Eastern Ukraine that the ceasefire agreement had been maintained for the most part since September 1 and that he hopes that results would be achieved at the October 2 summit under the Normandy format, and expressed his strong hope that Russia would continue to play a constructive role towards the full implementation of the Minsk Agreements.
President Putin stated that the Ukrainian side must also firmly comply with the Minsk Agreements, and asked Prime Minister Abe to convey that point to President Poroshenko at the meeting to be held later.

(4) The situation in Syria

Prime Minister Abe stated that stabilizing the situation in Syria, from which refugees were flowing out, was extremely important. President Putin responded that the spreading of terrorism was the most serious issue, and explained Russia’s efforts aimed at eliminating terrorism.