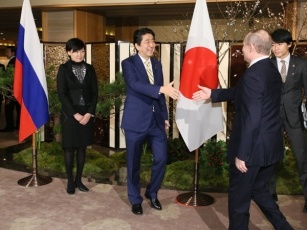 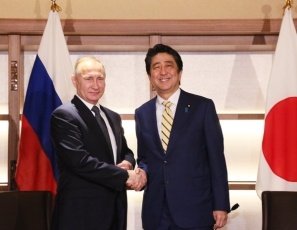 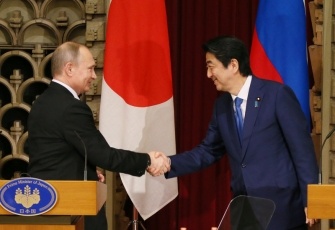 H.E. Mr. Putin, Vladimir Vladimirovich, President of the Russian Federation, made an official working visit to Nagato City, Yamaguchi Prefecture, and Tokyo on December 15 and 16. The overview is as follows. 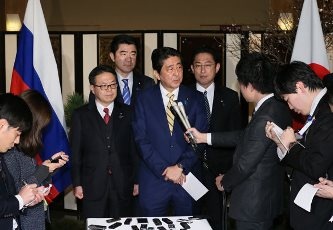 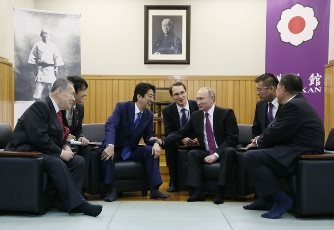 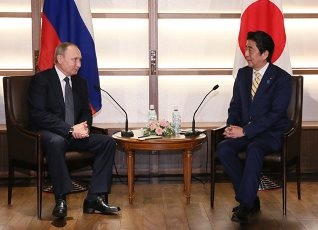 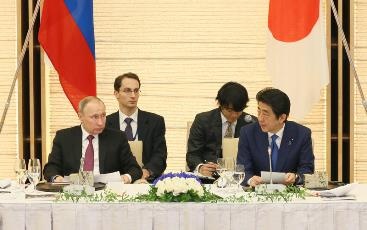 (1) Issue of concluding a peace treaty

i) Based on the meetings that took place between the two leaders in Sochi, Vladivostok and Lima, both leaders held a candid and extremely in-depth discussion on “free visits” by former island residents to their hometowns, joint economic activity on the four islands under a special arrangement between Japan and Russia, and the peace treaty issue. Prime Minister Abe handed a letter entrusted by former island residents to President Putin directly.

ii) As a result of the discussion, the two leaders expressed their sincere determination to resolve the peace treaty issue, and agreed to commence discussions on a special arrangement for undertaking joint economic activity on the four islands. Discussions over joint economic activity will take place within the framework of the negotiations on concluding a peace treaty, on the basis of the “new approach”, which is a future-oriented concept that sets out a future vision for the four northern islands and seeks solutions within that. Additionally, from the humanitarian point of view, it was agreed that all probable proposals will be examined promptly in order to grant the wishes of former island residents hoping to visit their hometowns and make grave visits freely.

Prime Minister Abe stated that under the situations of increasingly severe security environment in the Asia-Pacific region, it is important for Japan and Russia to hold candid exchanges of views mutually regarding their own areas of interest on the security front. The two leaders welcomed that bilateral dialogues by security councils of both sides and defense exchanges are taking place, and shared the view that these dialogues and exchanges will continue in the future.

i) The two leaders confirmed progress of materializing the eight-point cooperation plan (Refer to “3. Prepared documents”). Prime Minister Abe explained progress with discussing cooperation on medical care such as extending healthy lifespans and pediatrics, cooperation on urban development such as pilot programs in Voronezh and Vladivostok, cooperation on energy such as decommissioning nuclear reactors and promoting the introduction of wind power generation, the implementation next year of training visits to Japan on production management in the area of industrial diversification, the expansion of a greenhouse vegetable cultivation project in the Far East, and cooperation on advanced technologies, including dry storage technologies for agricultural produce. The two leaders agreed onpromoting the further materialization of the eight-point cooperation plan.

i) During President Putin’s visit to Japan, Japan announced the relaxation of visa requirements for Russian nationals.

ii) Prime Minister Abe confirmed a decision to implement the “Japan Year in Russia” and “Russia Year in Japan” in 2018 and the achievements such as doubling inter-university exchanges and youth exchanges, tripling sports exchanges, and vitalizing local exchanges between Japan and Russia, and carry this momentum to further advance the Japan-Russia relationship. The Prime Minister also confirmed that office of the Japan National Tourism Organization (JNTO) will open in Moscow.

Prime Minister Abe stated that it is important for the relevant United Nations Security Council (UNSC) resolutions to be fulfilled fully and strictly, that there has been no change in his determination to make every effort to resolve the abductions issue urgently, and that he intends to cooperate with Russia on resolving outstanding issues of concern. President Putin stated that along with exerting pressure on North Korea, it is be necessary to encourage North Korea to re-engage with the Six-Party Talks.

Prime Minister Abe expressed his concerns about a further deterioration in the humanitarian situation and strongly requested Russia to take constructive roll, concidering the importance of cessation of hostilities and implementing humanitarian assistance. In response, President Putin explained that Russia supports President Bashar Al-Assad, who was elected by an election, and is prepared to make efforts to resolve the issue, including the issue of Aleppo, while holding discussions with the countries in the region and the United States.

Prime Minister Abe mentioned that the training program for counternarcotics measures, participans of which included officers from Central Asian countries, was jointly organized with Russia and has been implemented successfully. The two leaders shared the view that advancing further cooperation between Japan and Russia with regard to Central Asia would be meaningful.

(2) Documents between the governments and authorities

A total of 12 documents were signed, including a memorandum between the governments on holding the “Japan Year in Russia” and “Russia Year in Japan,” and a 2017 consultation plan between the Japanese and Russian Ministries of Foreign Affairs, as well as documents in fields such as medical care and health, energy, industrial diversification, Far East development and cooperation on advanced technologies.

A total of 68 documents were signed that relate to projects to be carried out by companies etc. under the respective points of the eight-point cooperation plan.