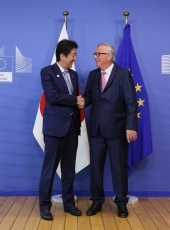 Photograph of the luncheon with the
President of the European Commission
(Photo: Cabinet Public Relations Office) 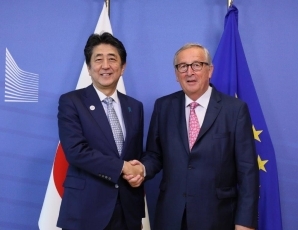 Photograph of the luncheon with the
President of the European Commission
(Photo: Cabinet Public Relations Office)

On September 27, commencing at 12:30 p.m. (same day, 7:30 p.m. JST) for approximately 70 minutes, Mr. Shinzo Abe, Prime Minister of Japan, who was visiting Brussels, had a luncheon meeting with H.E. Mr. Jean-Claude Juncker, President of the European Commission. The overview of the meeting is as follows.

1. At the outset, President Juncker stated that this would be his last meeting with Prime Minister Abe as President of the European Commission. He expressed his appreciation once again for having been able to significantly deepen Japan-EU relations with Prime Minister Abe for five years, as epitomized especially by the conclusion of the Japan-EU Economic Partnership Agreement (EPA) and the Japan-EU Strategic Partnership Agreement (SPA) and the document on connectivity signed on the day (“The Partnership on Sustainable Connectivity and Quality Infrastructure Between Japan and the European Union” (English (PDF)

2. Prime Minister Abe welcomed the ongoing progress in the EU on alleviation of the import measures on Japanese food products which were introduced following the Great East Japan Earthquake, and expressed Japan’s expectation for an early realization of the alleviation and his gratitude to President Juncker for his efforts.

3. The two leaders also exchanged views regarding regional situations, such as the withdrawal of the United Kingdom from the EU, relations with the United States, and the situation in Asia including the Korean Peninsula, as well as future Japan-EU cooperation in areas such as security.