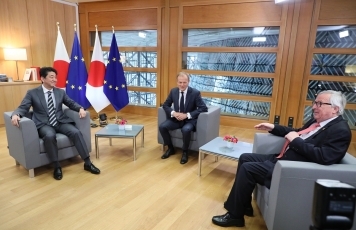 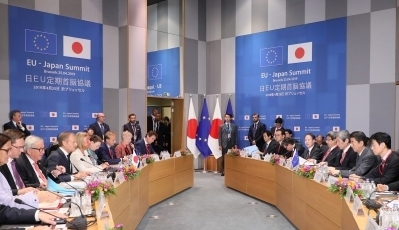 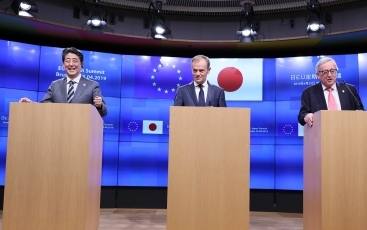 ) was issued on the occasion of the Summit Meeting.

1. Coordination toward the G20 Osaka Summit

(1) The leaders shared the view that both Japan and the EU should closely cooperate toward the success of the G20 Osaka Summit in June. Prime Minister Abe requested strong support from the EU to launch the “Osaka Track” to discuss on the data governance, in particular focusing on the electronic commerce, and obtained support from the EU leaders.

(2) The leaders also shared the view that it is a top priority for the international society to maintain the free trade system and acknowledged the necessity of maintaining a momentum for World Trade Organization (WTO) reform, including their cooperation to ensure the proper functioning of the Appellate Body.

(2) The leaders confirmed that the Japan-EU relations underwent transition to a new dimension owing to the entry into force of the EPA, and that the Agreement has generally been implemented smoothly thereafter, along with the success of the first Joint Committee of the EPA held in April this year, and acknowledged the importance of continuously promoting trade and investment between Japan and the EU based on the Agreement.

(3) Regarding the SPA, the leaders also welcomed that the first Joint Committee of the SPA was held in March this year and confirmed that they will promote the Japan-EU cooperation under the Agreement, focusing on areas including sustainable connectivity, quality infrastructure and global issues.

(4) Furthermore, Prime Minister Abe explained that reconstruction from the earthquake disaster is top priority for Japan and requested that the EU’s restriction on imports of Japanese food products from Japan be eliminated as early as possible based on scientific evidences.

The leaders also exchanged views on Brexit and regional situations including China, North Korea, Iran and Ukraine. In particular, with regard to the North Korean issue, the leaders reaffirmed close cooperation to realize the complete, verifiable and irreversible dismantlement by North Korea of all weapons of mass destruction and ballistic missiles of all ranges, based on the United Nations Security Council (UNSC) resolutions. In addition, Prime Minister Abe requested understanding and cooperation for early resolution of the abductions issue which is the top priority, and obtained support by President Tusk and President Juncker.