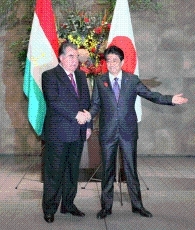 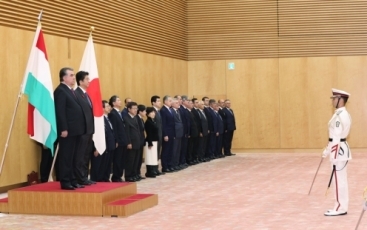 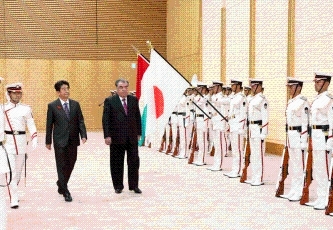 On October 5, commencing at around 6:40 p.m. for approximately 45 minutes, Mr. Shinzo Abe, Prime Minister of Japan, held a summit meeting with H.E. Mr. Emomali Rahmon, President of the Republic of Tajikistan, who officially paid a visit to Japan responding to the Government of Japan’s invitation. The overview of the meeting is as follows.

(1) Prime Minister Abe expressed his gratitude for the hospitality extended to him when he visited Tajikistan three years ago, and welcomed President Rahmon’s fourth visit to Japan. Prime Minister Abe also referred to the fact that this year marks the 20th memorial of the decease of Dr. Yutaka Akino, a former associate professor at Tsukuba University who was dispatched to Tajikistan as a member of the United Nations Mission of Observers in Tajikistan. Prime Minister Abe noted that Tajikistan shares its border with Afghanistan, and is the key country for regional stability as a “bulwark” that prevents inflows of narcotics, extremism and terrorism. Prime Minister Abe stated that Japan would promote the “Project for Human Resource Development Scholarship which was agreed upon recently”, along with cooperation in the fields such as border control.

(2) President Rahmon expressed his gratitude for the support that Japan has been extending to Tajikistan since the independence of the country, and conveyed his expectation that the bilateral relationship would continuously develop in a broad range of fields in the future, including the realization of the potential for trade and investment.

(3) With regard to the “Central Asia plus Japan” Dialogue, of which Japan and Tajikistan are currently serving as the joint chairs, the two leaders confirmed that the two countries would continue to cooperate on the area of tourism, which is designated as a key area of practical cooperation.

2. Cooperation on the global issues and regional affairs

(1) The two leaders welcomed that Japan-Tajikistan cooperation in the international fora is making steady progress, and confirmed their will to keep it advancing.

(2) The two leaders also exchanged views on regional affairs, including Central Asia, China and North Korea. In particular, with regard to the North Korea situation, Prime Minister Abe emphasized the importance of continuous and full implementation of the relevant UN Security Council resolutions by the international community. In addition, Prime Minister Abe reiterated his request for understanding and cooperation for the early resolution of the abductions issue. President Rahmon’s understanding was obtained.
Following the meeting, the two leaders signed the “Joint Statement on Deepening and Expanding the New Partnership Between Japan and the Republic of Tajikistan” (Russia (PDF)

). Other relevant documents, including an exchange of notes on the “Project for Human Resource Development Scholarship” grant aid, which were prepared by taking this opportunity, were also exchanged.

Afterwards, Prime Minister Abe hosted a dinner in a friendly atmosphere, which figures from various sectors who have a connection to Japan-Tajikistan relations attended and where President Rahmon’s 66th birthday was celebrated.

Page Top
Back to Japan-Tajikistan Relations