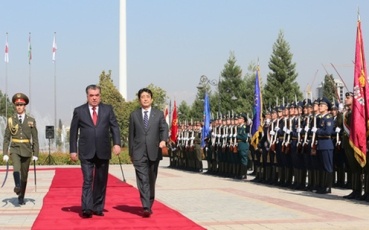 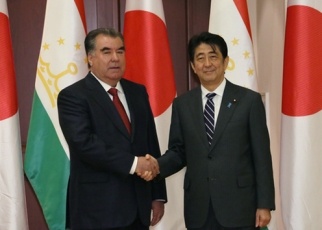 An overview of Prime Minister Shinzo Abe’s visit to the Republic of Tajikistan is as follows. 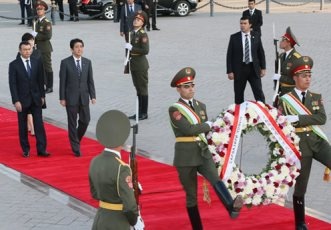 (1) Summit meeting with H.E. Mr. Emomali Rahmon, President of the Republic of Tajikistan (Announcement of a Japan-Tajikistan Joint Statement following the meeting) 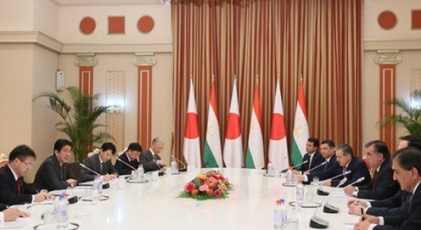 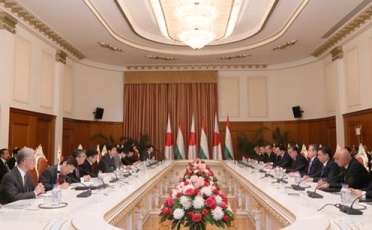 On October 24, commencing at 12:05 p.m. local time until 1:30 p.m., Prime Minister Shinzo Abe, who was on an official visit to Tajikistan, held a summit meeting that ran for approximately 1 hour and 30 minutes with H.E. Mr. Emomali Rahmon, President of the Republic of Tajikistan. The initial talks lasted for approximately 45 minutes, comprising a meeting of a small group of relevant persons. It was followed by a larger meeting, which ran for approximately 40 minutes.

(i) General remarks
Prime Minister Abe first stated that he is the first Japanese prime minister to visit Tajikistan, and then expressed his condolences regarding flood damage that Tajikistan sustained in July this year.

Prime Minister Abe commented on the decision to dispatch an Extraordinary and Plenipotentiary Ambassador of Japan to Tajikistan next year and the decision for introducing a multiple visa with regard to diplomatic and official passports.

(iii) Human resources development
Prime Minister Abe outlined the Japanese Government’s intent to utilize technical colleges and other institutions of Japanese education in engineering to assist Tajikistan in the training and development of human resources in advanced industries. Prime Minister Abe then stated that personnel of Tajikistan have been invited to Japan in order to make the relevant preparations.

(i) The two leaders commented on cooperation regarding the“Central Asia plus Japan” Dialogue, and the problem of transportation and logistics, which is the most important challenge related to development in the region, and expressed intent to examine specific measures for cooperation.

(ii) Prime Minister Abe stated that Japan intends to continue providing cooperation regarding border control and counter narcotics in relation to terrorism and extremism, which are very important issues for Tajikistan since it shares a long border with the Islamic Republic of Afghanistan.

(iii) Prime Minister Abe requested the understanding and support of Tajikistan with regard to the implementation of bilateral cooperation related to water problems, which are a significant challenge for the region, with the aim of alleviating such problems.

(i) President Rahmon explained that the situation in Afghanistan can affect all of Central Asia since this country shares borders with some countries in the region. Prime Minister Abe stated that Japan intends to continue with initiatives focused on stability and development in Afghanistan. Prime Minister Abe then welcomed the conclusion of a proposed agriculture-related project to control locusts, as this will be beneficial for Afghanistan and the entire region of Central Asia. The two leaders exchanged opinions on ISIL and other terrorism issues.

(ii) In regard to North Korea, Prime Minister Abe stated that the country is blatantly violating the United Nations (UN) Security Council Resolution by continuing to develop nuclear weapons and missiles, and that the international society should work together in calling on North Korea to restrain its provocative actions and strictly observe the UN Security Council Resolution. Prime Minister Abe also stated that the North Korea abduction issue is a high priority for Japan, and expressed his hope for the understanding and cooperation of Tajikistan in working toward an early resolution.

(i) General remarks
Prime Minister Abe indicated that Japan will make further contributions to the peace and stability of the international society, from the position of “Proactive Contribution to Peace” and also based on the recently enacted “Legislation for Peace and Security.” Prime Minister Abe called for support of Japan’s efforts in this area.

(ii) United Nations
Prime Minister Abe stated that it is important to realize an early start to intergovernmental negotiations based on written agreements, so as to obtain specific outcomes of the reforms of the UN Security Council during the current session of the UN General Assembly. Prime Minister Abe also called for the active support and participation of Tajikistan in regard to this. 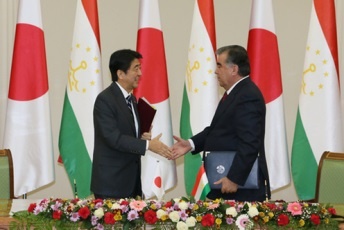 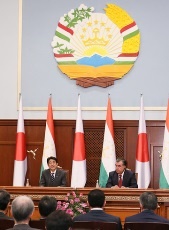 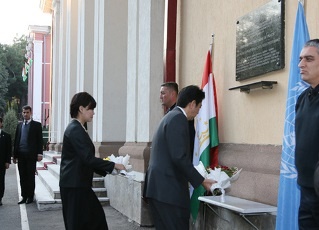 I. Commencing at 4:41 p.m. local time for approximately 20 minutes, Prime Minister Abe and Mrs. Abe engaged in a floral tribute at a plaque at the Tajikistan United Nations Office in the capital city of Dushanbe, honoring Dr. Yutaka Akino, Former Civil Affairs Officer of the United Nations Mission of Observers in Tajikistan (UNMOT), and other United Nations personnel. Following this floral tribute, Prime Minister Abe commented, “Thinking of Dr. Akino who sought to create a world that is free from conflict, I have renewed my resolve to make a contribution to world peace.”

II. Tajikistan, which gained independence in 1991, suffered from a civil war from 1992 through 1997, and even after a peace agreement was reached in 1997, difficult times continued for reestablishing peace. As such, the United Nations Tajikistan Office of Peace Building was set up, and Dr. Yutaka Akino was dispatched there in 1998. Dr. Akino dedicated his life to this mission of building peace in Tajikistan, and lost his life in duty on July 20, 1998.

Page Top
Back to Japan-Tajikistan Relations