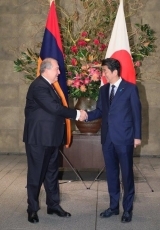 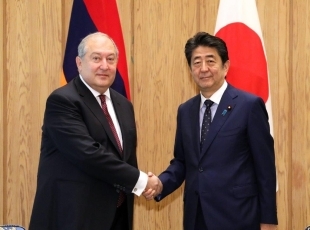 On October 24, commencing at 10:10 a.m. for approximately 25 minutes, Mr. Shinzo Abe, Prime Minister of Japan had a meeting with H.E. Mr. Armen SARKISSIAN, President of the Republic of Armenia. The overview of the meeting is as follows.

Prime Minister Abe welcomed the visit of President Sarkissian to Japan and stated that “Armenia is an important partner, which shares universal values such as freedom, democracy, human rights and the rule of law”, “I also value the historical connection between the peoples of Japan and Armenia, such as the activities of Mr. SHIBUSAWA Eiichi, who once helped Armenian refugees.”
In response, President Sarkissian stated that he appreciated the invitation to the historical Ceremony of the Enthronement of His Majesty the Emperor that exactly opened a new era.

Prime Minister Abe, concerning bilateral relations, stated that “Japan will cooperate for further development of Armenia with the pillars of human resource development and improvement of infrastructure and business environment”, “I expect to improve our awareness of each other through efforts such as tourism”
In response, President Sarkissian stated that Armenia is a hub for East-West exchanges and both countries are common in that there are many natural disasters. He also expressed his appreciation for the Japanese support for the earthquake occurred in Armenia in 1988. He also mentioned that Armenia is focusing on the artificial intelligence (AI) and advanced technology and has knowledge in the field of nuclear power. He insisted that he would introduce Armenia to Japanese companies definitely in order to deepen the cooperation with Japan in various new fields, noting that Armenia has the advantage such as being a member of the Eurasian Economic Union in the area of trade and investment and multinational corporations working actively in Armenia. The two leaders agreed to work closely together toward the future cooperation.

Prime Minister Abe asked for understanding and cooperation for the early resolution of the abductions issue.

Page Top
Back to Japan-Armenia Relations