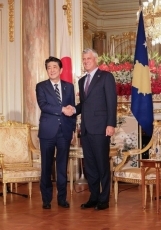 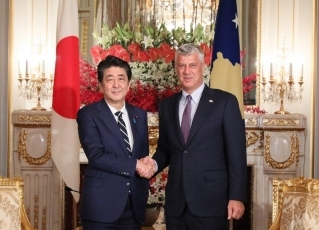 On October 21, commencing at 6:30 p.m. for approximately 15 minutes, Mr. Shinzo Abe, Prime Minister of Japan, held a Summit Meeting with H.E. Mr. Hashim Thaci, President of the Republic of Kosovo, who is visiting Japan. The overview of the meeting is as follows. The meeting was attended on the Japanese side by Mr. OKADA Naoki, Deputy Chief Cabinet Secretary and others.

1. At the outset, Prime Minister Abe welcomed President Thaci’s visit to Japan following his visit last month. Prime Minister Abe stated, “I am pleased that high-level dialogues have been active, including two summit meetings in this memorable year of the tenth anniversary of Japan-Kosovo diplomatic relations.” In response, President Thaci expressed his gratitude for being able to have two summit meetings in a short period as well as condolences for the damages caused by Typhoon Hagibis.

2. Prime Minister Abe then stated, “I am pleased that the seminar to introduce business climate in Kosovo which we discussed at last month’s summit meeting was successfully held in Vienna early this month.” In response, President Thaci welcomed the success of the seminar, and expressed hope for further development of cooperation between the two countries in the business field. In addition, the two leaders agreed to enhance grassroots exchanges in various fields, including economy and culture taking the opportunity of the opening of Japanese Embassy in Kosovo.

3. The two leaders also exchanged views regarding the situation in Kosovo and the Western Balkans. In addition, Prime Minister Abe asked for President Thaci’s understanding and cooperation toward early resolution of the abductions issue and obtained President Thaci’s support.