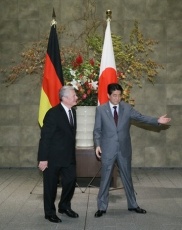 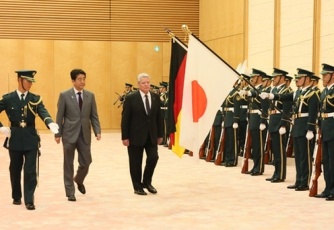 On November 14, commencing at 6:40 p.m. until 7:40 p.m. for approximately 60 minutes, Mr. Shinzo Abe, Prime Minister of Japan, held a summit meeting with H.E. Mr. Joachim Gauck, President of the Federal Republic of Germany, who is making an official working visit to Japan. The overview is as follows. 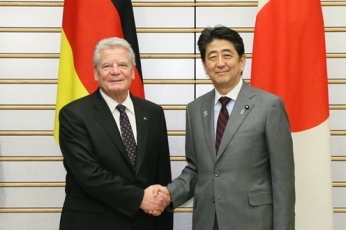 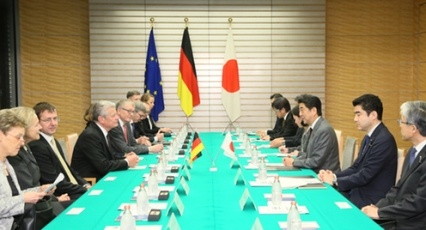 (1) At the outset, Prime Minister Abe welcomed President Gauck on his first visit to Japan, and voiced his hope to use this visit as an opportunity to further advance the relationship between Japan and Germany, which play important roles in the peace, stability, and prosperity of the international community as the leaders of Asia and Europe.

(2) In response, President Gauck thanked Prime Minister Abe for the warm welcome, and expressed the view that Japan and Germany are connected by a bond of deep friendship and share common values. President Gauck stated that Japan and Germany also share many points in common economically and politically, and have developed in accordance with the rule of law, and on that basis he hopes to pursue cooperation in many fields.

2. Cooperation between Japan and Germany in international society 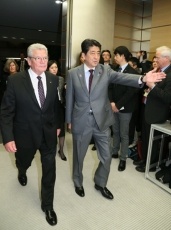 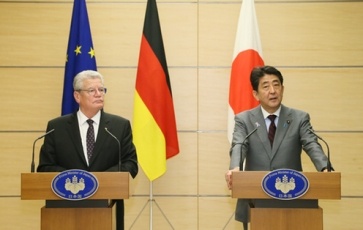 (Photo: Cabinet Public Relations Office)
(1) The two leaders also exchanged views on regional situations such as the situation in East Asia, including the East China Sea and South China Sea issues, the situation in Ukraine, and the situation in North Korea. On that basis, the two leaders shared the recognition that attempts to change the status quo by force are unacceptable, and confirmed that Japan and Germany will continue to work together to maintain an international order that is based on the rule of law. Furthermore, President Gauck highly appreciated the agreement reached between Japan and the Republic of Korea at the end of last year as an important agreement for elevating the relationship of trust between the two countries. (2) In addition, President Gauck explained Germany’s efforts with regard to the issue of refugees and migrants, and highly appreciated the support measures extended by Japan, which have totaled 6 billion USD. (3) With regard to the United Kingdom’s decision to leave the European Union (EU), Prime Minister Abe expressed the view that it is important for Europe to maintain strong unity, and stated that it is important that companies continue to be able to conduct business uninterrupted in Europe and that predictability is ensured. Furthermore, the two leaders confirmed that from this perspective, reaching an agreement in principle on the Japan-EU Economic Partnership Agreement (EPA) negotiations within this year is important. (4) With regard to the US presidential election, Prime Minister Abe explained that he is scheduled to meet with Mr. Donald Trump, President-elect of the United States of America, in New York on November 17, and intends to hold a frank exchange of views on various issues, including the Trans-Pacific Partnership. 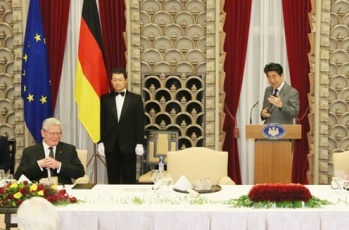 After the summit meeting, commencing at 8:05 p.m. for approximately 75 minutes, Prime Minister Abe and his wife hosted a banquet to welcome President Gauck and Ms. Daniela Schadt.

The banquet was attended by guests from various sectors who have a connection with Japan-Germany relations and was held in a friendly atmosphere.