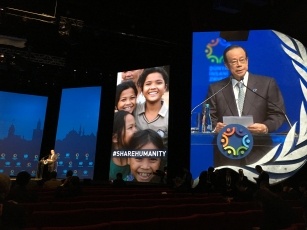 The World Humanitarian Summit was held from May 23 in Istanbul, the Republic of Turkey, and Mr. Yasuo Fukuda, former Prime Minister of Japan, attended the Summit as representative of the Government of Japan. Key points are as follows.

1. The World Humanitarian Summit was held for the first time in response to the call by Mr. Ban Ki-moon, Secretary-General of the United Nations. Its attendees, aside from Representative Fukuda, included heads of State or Government such as H.E. Mr. Recep Tayyip Erdoğan, President of the Republic of Turkey, H.E. Dr. Angela Merkel, Chancellor of the Federal Republic of Germany, heads of international organizations including Secretary-General Ban Ki-moon, and representatives from NGOs, the private sector, and academic institutions totaling around 9,000 people. These representatives discussed effective responses to intensifying humanitarian crises, including the refugee issue in the Middle East and voiced their intent to take concrete actions.

2. At the Summit, Representative Fukuda emphasized the great importance of reaching out to each individual suffering under severe conditions and of equipping them with the “abilities” that will allow them to build their own country’s future with their own hands. He presented Japan’s commitment to provide a new assistance package for social stability and for the growth to bring benefits to all people in the Middle East and North Africa. For example, building the capacities of 20 thousand people in the Middle East and North Africa over the coming 3 years, accepting more Syrian students as well as expanding deployment of “Japan Team for Refugees and Communities” of the Japan International Cooperation Agency (JICA). Such assistance will be in total of 6 billion US dollars in over the coming 3 years.

4. Additionally, Japan held a side event together with the United Nations High Commissioner for Refugees (UNHCR), the United Nations Development Programme (UNDP), JICA, and others on the theme of “Strengthening the Humanitarian - Development Nexus”. Participants included representatives from international organizations, NGOs, refugee host countries, and refugee assisting countries. The event reviewed initiatives conducted thus far to handle the intensifying refugee problem and involved a robust exchange of opinions on the outlook.