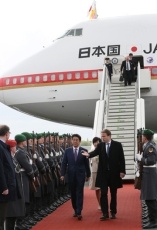 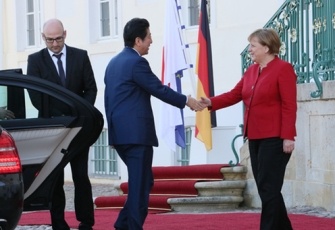 On Wednesday, May 4, commencing at 5:45 p.m. (local time) for approximately 50 minutes, Mr. Shinzo Abe, Prime Minister of Japan, held a summit meeting with H.E. Dr. Angela Merkel, Federal Chancellor of the Federal Republic of Germany at Schloss Meseberg (Germany’s official state guest house) located about 60 kilometers from Berlin and then held a working dinner commencing at 7:00 p.m. for approximately two hours. The overview from the meetings is as follows.

(1) In her opening remarks, Federal Chancellor Merkel welcomed the visit by Prime Minister Abe to Germany and offered words of sympathy regarding the Earthquake centered in the Kumamoto Region. She also commented that Germany hopes to advance cooperation between the two countries in the G7 framework aimed at achieving global peace and stability.

(1) Prime Minister Abe stated that the revitalization of the global economy requires accelerated structural reforms and flexible fiscal policies, and that he hopes to send a strong message as the G7 at the Ise-Shima Summit. As Federal Chancellor Merkel noted, he agreed that implementing structural reforms is the most important and asserted that he is also putting the most emphasis on the “third arrow” of Abenomics, explaining Japan’s domestic policies.

(2) Federal Chancellor Merkel acknowledged that she is not a front-runner for fiscal policies, but affirmed the importance of simultaneously implementing monetary policies, fiscal policies, and structural reforms, and particularly stressed the importance of stimulating private-sector investments. Furthermore, Federal Chancellor Merkel spoke out against high volatility of foreign exchange rates, and the two leaders concurred to cooperate on the stability of foreign exchange rates.

(3) The two leaders completely concurred on the importance of implementing structural reforms and fiscal policies in balanced manner and confirmed that the G7 will continue discussions on this topic among leaders after discussions amongst Sherpas, and finalize a message as the G7 at the Ise-Shima Summit.

(4) Prime Minister Abe explained that he hopes to discuss issues such as terrorism, the Middle East, Russia and Ukraine at the Ise-Shima Summit, and the two leaders confirmed the necessity for the G7, which shares universal values, to take the initiative in combating terrorism and violent extremism, the top priority issues for the international society.

(1) Prime Minister Abe commented that Japan and Germany are global partners which share fundamental values and have important roles to play in addressing the issues facing the international society as major leaders in Asia and Europe. In this context, the two leaders confirmed their intention to make the most of the formulation of Japan’s Legislation for Peace and Security, and contribute even more actively to the peace and security of the international society through Japan-Germany cooperation. They also agreed to continue dialogue at a meeting of Foreign Ministry and Defense Ministry officials from the two countries scheduled next month and to launch cyber security consultation by the end of this year.

(2) Japan and Germany lead the world in science and technology, as well as innovation, and the two leaders welcomed the announcement last week of a joint statement by Japan’s Ministry of Economy, Trade and Industry and Germany’s Federal Ministry for Economic Affairs and Energy on IoT and Industrie 4.0. Additionally, Federal Chancellor Merkel invited Prime Minister Abe to attend next year’s CeBIT (an IT-related exhibition) and expressed her interest in having Japan participate as a partner country. Prime Minister Abe stated that he hopes to attend if circumstances permit.

(3) In addition, the two leaders welcomed the 50-year anniversary of the establishment of the Japanese Chamber of Commerce and Industry in Dusseldorf and confirmed their intention to advance business collaboration among small- and medium-sized enterprises, and the Japan-EU Economic Partnership Agreement.

(4) Prime Minister Abe told Federal Chancellor Merkel that Japan would like to invite H.E. Mr. Joachim Gauck, Federal President of the Federal Republic of Germany, to Japan in order to further strengthen the close relationship between Japan and Germany, and Federal Chancellor Merkel commented that President Gauck is highly interested in Japan and is excited to visit Japan.

(5) The two leaders confirmed that the Japanese-German Center Berlin and Japan-Germany Forum are important tools for people-to-people and knowledge-related interaction, and agreed to continue active utilization.

(2) Regarding situations in East Asia, the two leaders agreed that unilateral attempts to change the status quo by force pose a challenge to the international order based on the universal value of the rule of law, and cannot be accepted. Additionally, they confirmed that North Korea’s nuclear and missile developments pose a serious threat not only to the region but also to international peace and security. Federal Chancellor Merkel praised the recent agreement between Japan and the Republic of Korea and expressed her hopes that it will favorably affect the response to North Korea.

(3) Regarding the situation in Ukraine, Prime Minister Abe explained that he called on H.E. Mr. Petro Poroshenko, President of Ukraine, who visited Japan last month, to fully implement the Minsk Agreements and accelerate domestic reforms, and that Japan would support these efforts as long as Ukraine moves forward with reforms. Federal Chancellor Merkel commented that it is important to continue all efforts under the Normandy Format, and that it is necessary for Ukraine to pursue its efforts of improving situations and to promote revisions of the Election Law. The two leaders also agreed that it is important for Russia to play a constructive role in relation to Ukraine, Syria, ISIL, and other situations.

The two leaders agreed on the importance of G4 collaboration for United Nations Security Council reforms and also confirmed that they intend to continue the cooperation.