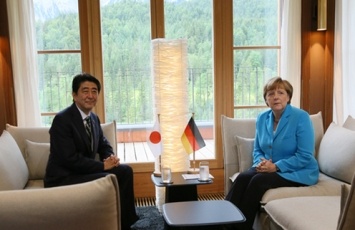 On Sunday, June 7, commencing at 6:00 p.m. (local time) for approximately 20 minutes, Mr. Shinzo Abe, Prime Minister of Japan, who was visiting Elmau (Germany) to attend the G7 Summit, held a summit meeting with H.E. Dr. Angela Merkel, Federal Chancellor of the Federal Republic of Germany. The overview of the meeting is as follows.

Chancellor Merkel stated that she was delighted to meet with Prime Minister Abe again and praised his meaningful contribution to the first session of the G7 Summit. In response, Prime Minister Abe stated that he was also delighted to meet Chancellor Merkel again in such a splendid venue and would like to praise her accomplishments as the chair of the G7 Summit, and that Japan, which will serve as the chair country after Germany next year, intends to cooperate even more closely with Germany, including to taking over the outcome of this year.

2. Situations in Ukraine and Russia

Prime Minister Abe expressed his visit to the Ukraine, which was made for the first time in the history as a Prime Minister of Japan, shows Japan’s active approach and intention toward resolving the situation in Ukraine as the next G7 chair country. On the other hand, Prime Minister Abe also gave an explanation on the relationship with Russia that there remains the Northern Territories issue between Japan and Russia, which has been unsolved for 70 years after WWII and it is necessary to hold direct dialogues between the leaders for the resolution of the issue. Chancellor Merkel stated that she was very grateful for Prime Minister Abe’s visit to Ukraine and thanked him for Japan’s tremendous support for that country. Chancellor Merkel also showed her support for Prime Minister Abe’s approach concerning the resolution of the territorial issue and added that Germany would be pleased if any one of the disputes in the world would be solved and it would cooperate with Japan for that purpose.

3. Chair of the Next G7 Summit

Chancellor Merkel explained that as the G7 chair country, Germany was addressing a number of issues, particularly with an awareness of women empowerment, and she hoped that Japan would take on the challenge of addressing these issues. Prime Minister Abe responded that as the next chair country, Japan intends to firmly take over these issues inherited from Chancellor Merkel, including the women empowerrment and anti-corruption, and hopes to continue to cooperate with Germany in the future.

Prime Minister Abe thanked Chancellor Merkel for Germany’s understanding with regard to Japan’s Cabinet resolution on its “Security Legislation.” In response, Chancellor Merkel stated that Germany supports 100% Japan’s active contribution to peace in the international community.

Prime Minister Abe explained that he intends to deepen relations between Japan’s and Germany’s small- and medium-sized enterprises of both countries, starting with the dispatch of Japan’s economic mission that is scheduled for next month. Both leaders also confirmed to cooperate toward the conclusion of the Japan-Europe Economic Partnership Agreement (EPA) within the year.