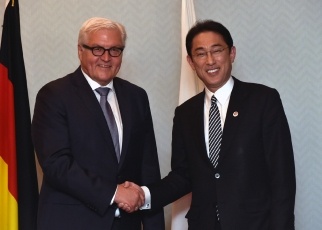 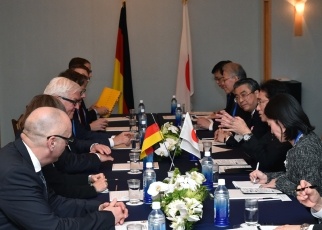 On Sunday, April 10, commencing at 10:20 p.m. for approximately 40 minutes, Mr. Fumio Kishida, Minister for Foreign Affairs, held a meeting with H.E. Dr. Frank-Walter Steinmeier, Federal Minister for Foreign Affairs, Germany, in Hiroshima, during his visit to attend the G7 Hiroshima Foreign Ministers’ Meeting. The overview of the meeting is as follows.

2. 2. Both ministers also agreed to work in close cooperation on the intergovernmental negotiations based on written agreements in New York, so as to obtain specific outcomes of the reforms of the United Nations Security Council.

3. Furthermore, the two ministers discussed the situations in Russia-Ukraine, Afghanistan and East Asia. Additionally, both ministers shared the view that they will continue to work together towards the further development of Japan-Germany relations.