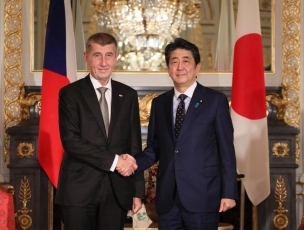 Prime Minister Abe welcomed Prime Minister Babis to Japan, stating, “I welcome your first visit to Japan. I am pleased we can meet again after our previous meeting in Slovakia this April.” In response, Prime Minister Babis stated that it is a great honor to be able to participate to the Ceremony of Enthronement and expressed gratitude for the invitation to attend a series of events including the Banquet last night.

Prime Minister Abe expressed his appreciation for the messages of sympathy to those affected by Typhoon Hagibis. Prime Minister Abe stated, “I appreciate that we were able to confirm our commitment to strengthen bilateral relations in April besides “Visegrad Group plus Japan” Summit Meeting,” adding that, “Japan looks forward to deepening our cooperation toward next year’s 100th anniversary of Japan-Czech Republic exchanges.” The two leaders shared the view that they will increase bilateral exchanges in the lead-up to the100th anniversary. In this context, Prime Minister Babis invited Prime Minister Abe to the Czech Republic during the next year, and he stated that since the Czech Republic is the Chair country for the Visegrad Group till next year, we can pursue to hold the “V4 + Japan” Summit Meeting.

Prime Minister Abe stated, “I look forward to the Czech leadership as the holder of V4 presidency.” The two leaders discussed and shared the view to work together toward future “V4+Japan” cooperation.