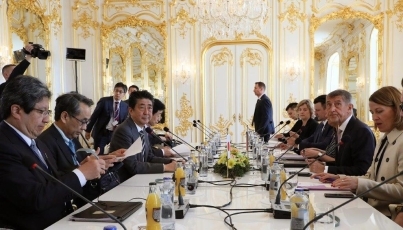 On Thursday, April 25, commencing at 12:20 p.m. (local time) for approximately 30 minutes, Prime Minister Shinzo Abe, during his visit to the Slovak Republic, held a summit meeting with H.E. Mr. Andrej Babiš, Prime Minister of the Czech Republic. The summary of the meeting is as follows.

1. In opening remarks, Prime Minister Abe stated that the Czech Republic is an important partner, which shares fundamental values such as freedom, democracy and the rule of law. He also noted that he is delighted that bilateral relations are developing vigorously in a wide range of areas. The two leaders agreed to further promote the leaders mutual visits on the occasion including the Ceremony of the Enthronement of His Majesty the Emperor and the Tokyo 2020 Olympic and Paralympic Games.

2. The two leaders also shared the view that the two countries will further develop bilateral economic relations, taking the opportunity of the entry into force of the Japan-EU Economic Partnership Agreement (EPA).

3. The two leaders discussed future “V4+Japan” cooperation, and exchanged views on issues of cybersecurity, climate change, and the regional situation including the situation of North Korea.