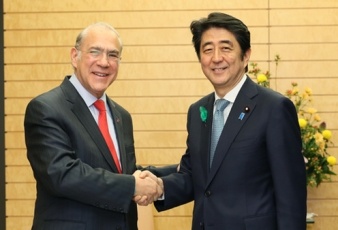 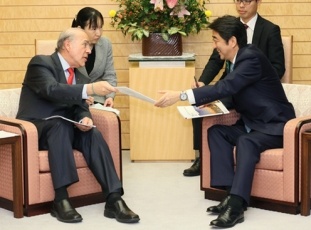 On April 15, from 6:10 p.m. for around 15 minutes, Prime Minister Shinzo Abe received a courtesy call from Mr. Ángel Gurría, Secretary-General of the OECD, who is visiting Japan, at the Prime Minister’s Office. The overview of the meeting is as follows (Mr. Juan Yermo, OECD Deputy Chief of Staff and others attended on the OECD side; and Mr. Katsunobu Kato, Deputy Chief Cabinet Secretary; Mr. Hiroshige Seko, Deputy Chief Cabinet Secretary; Mr. Kazuo Kodama, Ambassador, Permanent Delegation of Japan to the OECD; Ms. Naoko Saiki, Director-General, Economic Affairs Bureau MOFA and others attended on the Japan side).

1. Prime Minister Abe extended Japan’s official supports to the re-election of Secretary-General Gurría for his third mandate, and expressed gratitude for the strong support from the OECD to “Abenomics” and valuable recommendations in the OECD Economic Survey of Japan. Moreover, Prime Minister Abe stated that he would like to welcome the steady progress of the OECD Southeast Asia Regional Programme and that Japan would like to further contribute as a bridge between the South East Asia and the OECD.

2. In response, Secretary-General Gurría expressed gratitude for Japan’s support to his re-election, and commented that the largest message of the OECD Economic Survey of Japan released today was that “Abenomics” was working, even though there were some challenges left to tackle such as improvement of productivity and fiscal reform, and this was supported by concrete outlook of Japan’s economic growth (the OECD Economic Survey of Japan announces the outlook of Japan’s economic growth as follows: 1.0% for 2015, 1.4% for 2016.). He also mentioned the “fourth arrow” should be women’s participation (“Womenomics”) and this point of view had been already incorporated within the “Abenomics”, and the implementation became more important. Secretary-General Gurría also reiterated the OECD Southeast Asia Regional Programme had been making steady progress since its inauguration under Prime Minister Abe’s presidency, including the organization of the first Steering Group meeting and opening of Jakarta Office. Moreover, Secretary-General Gurría said that the OECD would like to continue to work not only with Japan but also for Japan in pursuing its policy goals.

Page Top
Back to Organization for Economic Cooperation and Development (OECD)