Meeting between State Minister for Foreign Affairs Yasuhide Nakayama and Mr. Ángel Gurría, Secretary General of the Organization for Economic Co-operation and Development and a related event 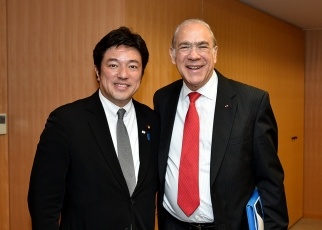 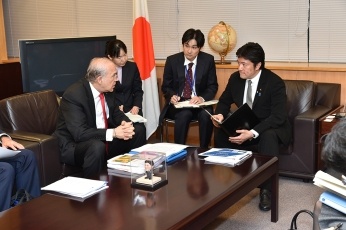 On April 14, State Minister for Foreign Affairs Yasuhide Nakayama held a meeting for approximately 25 minutes from 5:30 pm with Mr. Ángel Gurría, Secretary General of the OECD, who was visiting Japan, followed by a related event. An overview of the meeting and other event is as follows.

(1) We are grateful for supports from the OECD to organize events related to the 50th anniversary of Japan’s accession to the OECD, and to recover from the Great East Japan Earthquake, as well as for the policy recommendations of OECD Economic Survey of Japan and a strong support from the OECD to “Abenomics”.

(2) We appreciate the steady progress of the Southeast Asia Regional Programme. Japan would like to discuss and cooperate closely with the OECD regarding outreach activities to Asian countries including China.

(1) In terms of the Southeast Asia Regional Programme which Prime Minister Shinzo Abe launched at the OECD Ministerial Council Meeting chaired by Japan last year, there has been some progress, such as inauguration of the first OECD Southeast Asia Steering Group Meeting in Indonesia last month. I appreciate consistent initiative and support from Japan.

(2) As OECD reported in its Economic Survey of Japan, “Abenomics” is yielding positive results. Japan’s new structural reforms – the “third arrow” of “Abenomics” - must become more important than ever.

3. At the dinner held after the meeting, Mr. Toshihiro Nikai, Chairman of OECD/Economic Research Institute for ASEAN and East Asia (ERIA) Parliamentary League, Mr. Akihiro Ohata, Member of the House of Representatives, Secretary General Gurría of the OECD, and State Minister Nakayama made welcoming remarks and participants had pleasant exchanges in a relaxed atmosphere.