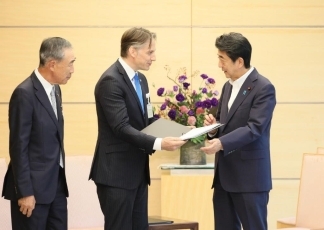 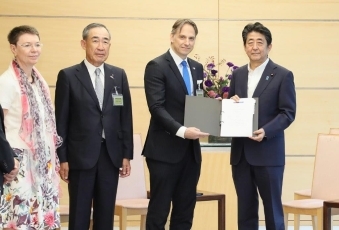 On Wednesday, 18 Sep, for approximately 15 minutes from 14:15 p.m., Prime Minister Shinzo Abe received a courtesy call from the Japan-EU Business Round Table (BRT) Co-Chairman Masaki Sakuyama (Chairman of board of directors of Mitsubishi Electric Corporation) and Mr. Michael Mroczek, (Chairman of the European Business Council in Japan (EBC) and representing BRT Co-Chairman). The summary of the meeting is as follows:

1. At the beginning of the meeting, Mr. Mroczek handed Prime Minister Abe the Joint Recommendation to the Government of Japan and the EU, which was adopted at the BRT Annual Meeting this year.

2. Subsequently, Co-Chairman Sakuyama expressed his gratitude for the leadership of Prime Minister Abe and the efforts of Japanese and EU government on entry into force of the Japan-EU EPA. He stated that the BRT hoped to maintain the free trade system and led to expand the business. He briefed on the discussions at the BRT Annual Meeting and summary of the Joint Recommendation and expressed the hope that Japanese and EU government would promote policies cooperating with industries to develop world economy.

3. Furthermore, Mr. Mroczek emphasized the importance of the Japan-EU EPA and stated that the recommendations they handed over today aimed to pave the way to increased regulatory and investment cooperation between Japan and the EU. He also stated that the BRT would like to strengthen the relationship between Japan and the EU in a wide range of fields.

4. Finally, Prime Minister Abe expressed his gratitude for long-term efforts made by the BRT toward the entry into force of the Japan-EU EPA and his delight in seeing that Japan and the EU have established a win-win relationship thanks to the agreement. He also stated that he looked forward to continuing to work closely with Japanese and the EU industries and further strengthening the Japan-EU relations.