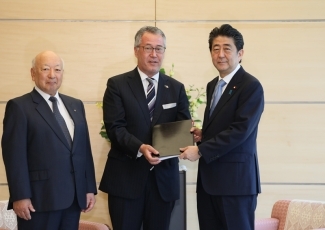 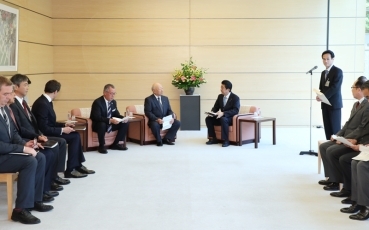 On Wednesday, 16 May, for approximately 10 minutes from 11:35 a.m., Prime Minister Shinzo Abe received a courtesy call from the EU-Japan Business Round Table (BRT) Co-Chairman Kazuo Tsukuda (Senior Executive Adviser of Mitsubishi Heavy Industries, Ltd.) and Mr. Danny Risberg, (Chairman of the European Business Council in Japan (EBC) and representing BRT Co-Chairman). The summary of the meeting is as follows:

1. At the beginning of the meeting, Mr. Risberg handed Prime Minister Abe a set of Joint Recommendations to the Government of Japan and the EU, which was adopted at the BRT Annual Meeting this year.

2. Subsequently, Co-Chairman Tsukuda briefed Prime Minister Abe on the discussions at the BRT Annual Meeting r and expressed the BRT’s hope that the finalisation of negotiations of the Japan-EU Economic Partnership Agreement (EPA) contribute to strengthening the free trade system and to creating more business opportunities, not only in Japan and the EU but also in other areas of the world.

3. Furthermore, Co-Chairman Tsukuda explained that taking into account the eventual expansion of business opportunities after the entry into force of the Japan-EU EPA, the BRT discussed topics such as digital economy, Sustainable Development Goals (SDGs) and regulatory cooperation, and requested both the Government of Japan and the EU to continue cooperation at a high level.

4. Mr. Risberg stated that the BRT hopes for an early signing and entry into force of the Japan –EU EPA, and wishes that in a time of instability, Japan and the EU could exert leadership by demonstrating that free, fair and rules-based trade is the foundation of a mutually-beneficial and close collaboration.

5. Finally, Prime Minister Abe expressed his gratitude for the efforts made by both Co-Chairmen, who will finish their terms this year, and stated that he would like to continue the utmost, government-side effort towards an early signing and entry into force of the Japan-EU EPA. He also stated that Japan would like to strengthen its economic relationship with the EU through working closely with industries.