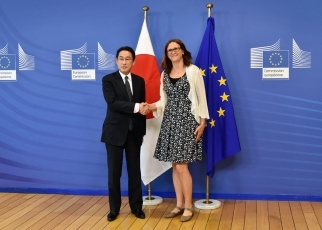 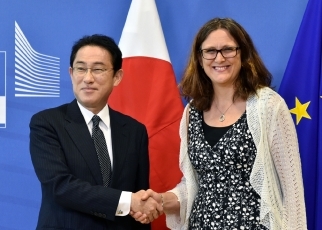 On July 5, commencing at around 12:30 p.m. (7:30 p.m. local time in Japan) for approximately 1 hour and 15 minutes, Mr. Fumio Kishida, Minister for Foreign Affairs, held a meeting over lunch on the negotiations on the Japan-EU Economic Partnership Agreement (EPA) with Dr. Cecilia Malmström, European Commissioner for Trade, during his visit to Brussels. The overview of the meeting is as follows.

1. Minister Kishida and Commissioner Malmström exercised their political leadership and held constructive discussions, embracing a strong sense of duty that Japan and the EU should keep flying the flag of free trade, while expressing utmost consideration for their respective domestic sensitivities.

2. Minister Kishida and Commissioner Malmström held the negotiation to confirm at the ministerial level that they have resolved the remaining important issues following the ministerial meeting held from June 30 to July 1, and that they reached agreement on agreement in principle of the Japan-EU EPA.

3. Minister Kishida and Commissioner Malmström agreed to seek final confirmation of the content of the agreement in principle confirmed at ministerial level at the leaders’ level during the Japan-EU Summit on July 6.

4. Minister Kishida and Commissioner Malmström shared the recognition that, amidst the protectionist movement, agreement in principle can send a forward-looking, powerful message to the world. Furthermore, they shared the recognition that the content of the agreement amounts to that Japan and EU, the drivers of free trade, set an example to the world by agreeing on this comprehensive, high-level and balanced agreement.