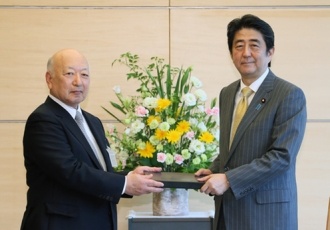 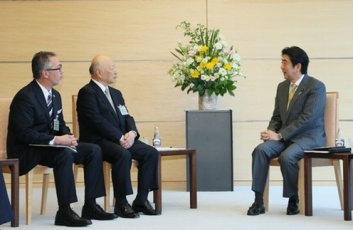 On Monday, May 18, for approximately 15 minutes from 2:15 p.m., Prime Minister Shinzo Abe received a courtesy call from the EU-Japan Business Round Table (BRT) Co-Chairman Kazuo Tsukuda (Senior Executive Adviser of Mitsubishi Heavy Industries, Ltd.) and the Representative of Co-Chairman Danny Risberg (Chairman of the European Business Council / CEO of Philips Electronics Japan Ltd.). The summary of the meeting is as follows.

1. At the beginning of the meeting, BRT Co-Chairman Tsukuda handed the Prime Minister a set of Joint Recommendations to the Governments of Japan and the EU which was adopted at the BRT Annual Meeting of this year. BRT Co-Chairman Tsukuda then stated that the Joint Recommendations included a strong message welcoming and supporting the determination of the Japanese and the EU Governments to work for agreement in principle during 2015. He also noted that regulatory cooperation is the important element to promote innovation and strengthening competition power and expected it to be embodied through the Japan-EU EPA.

2. Subsequently, the Representative of Co-Chairman Danny Risberg stated European business is hoping for not only the swift but also the substantial, comprehensive and ambitious Japan-EU EPA to be agreed.

3. In response, Prime Minister Abe expressed his gratitude to those who made the Recommendations. He also noted that the Government of Japan, taking into account the expectations and voices from the businesses in both Japan and the EU, will work hard for agreement in principle on the Japan-EU EPA during this year and for Japan-EU regulatory cooperation in order to further develop the Japan-EU economic relationship.