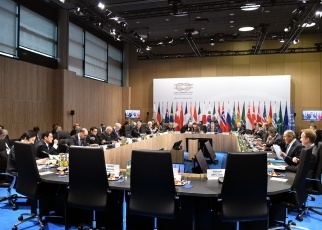 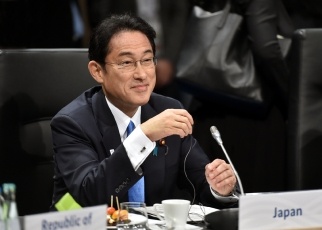 The G20 Foreign Ministers’ Meeting was held in Bonn (the Federal Republic of Germany) on Thursday, February 16 and Friday, February 17, and Mr. Fumio Kishida, Minister for Foreign Affairs, and senior officials attended the meeting. In addition to the G20 member countries, invited countries (the Kingdom of Spain, the Republic of Singapore, the Kingdom of the Netherlands, the Kingdom of Norway and the Socialist Republic of Viet Nam (the Asia-Pacific Economic Cooperation (APEC) Chair), and invited organizations (the United Nations (UN), the World Bank and the African Union Commission (AUC)) also attended the meeting.

At the meeting, discussions took place on “The 2030 Agenda for Sustainable Development” (1st session), “Maintaining Peace in a Complex World (“Sustaining Peace”)” (2nd session), and “Cooperation with Africa” (3rd session (working lunch)), under the overarching theme of “shaping the global order: foreign policy beyond crisis management.” There was also a dinner for the Ministers hosted by Mr. Sigmar Gabriel, Federal Minister for Foreign Affairs of Germany. The overview of the meeting is as follows (Minister Kishida attended the 2nd session and the dinner hosted by Federal Minister Gabriel). In addition, the Foreign Minister of the Argentine Republic announced that a G20 Foreign Ministers’ Meeting will also be held in Buenos Aires next year.

1. Overviews of each session

At the beginning, Mr. António Guterres, the UN Secretary-General, gave a keynote statement on topics including the importance of mobilizing financial resources, measures to address climate change, and African development, as well as the efforts in the fields of education and health. This was followed by an exchange of views on accelerating efforts for achieving the targets of the 2030 Agenda for Sustainable Development. Other participants referred to the importance of efforts to address the challenges such as the refugee issue, poverty, education, gender and globalization.

At the beginning the representative from AUC gave a keynote statement on promoting development cooperation in accordance with Agenda 2063, and Ms. Federica Mogherini, the High Representative of the EU for Foreign Affairs and Security Policy, also gave a keynote statement on partnerships for the growth of Africa based on its ownership. Followingly, an active exchange of views on the efforts of international community to promote sustainable growth and ensure peace and stability in Africa took place.

(4) Overview of the main statements by Japan

i) An outline of statements by Foreign Minister Kishida is as follows:

(ii) It goes without saying that the UN assumes a significant role in “sustaining peace.” Under the initiative of the UN Secretary General Guterres, all of us are now reminded of the importance of conflict prevention. We are confident that institutional silos in the UN’s peacebuilding efforts will be removed under the Secretary-General’s leadership. In addition to contributions of 48.5 million dollars in total to the Peacebuilding Fund, Japan, in cooperation with the Chair of the Peacebuilding Commission, the Republic of Korea, will do its best to improve the working methods of the Commission and to strengthen the collaboration between the Security Council and the Commission.

(iii) As part of our efforts on “sustaining peace,” last July, I (Foreign Minister Kishida) chaired the Security Council Open Debate on "Peacebuilding in Africa" and emphasized that innovation of peacebuilding methods is the key, as well as building of institution, human capacity and trust. I (Foreign Minister Kishida)would like to call on G20 colleagues to gather our wisdom and technologies to enhance our efforts toward “sustaining peace.”

ii) An outline of statements by Japanese official is as follows:

(i) The 2030 Agenda has an important role in realizing a fairer and more peaceful world. In order also for G20 to contribute to the implementation of the 2030 Agenda, steady engagement by the G20 countries, including domestic implementation, is essential.

(ii) In Japan, the Sustainable Development Goals (SDGs) Promotion Headquarters was launched under the chairmanship of Mr. Shinzo Abe, Prime Minister of Japan, and with all Cabinet Ministers as members, to ensure a framework to work as a whole government. The SDGs implementation guidelines that put together both domestic and international measures were formulated on that basis. Japan is scheduled to participate in the voluntary national review at the UN High-level Political Forum (HLPF) in July this year. In the future, Japan will also take the lead in improving awareness of the SDGs as well as expanding participation by private enterprises as a core business going beyond Corporate Social Responsibility (CSR).

(iii) It is also important for G20 to promote implementation of the Agenda on the dual fronts of domestic implementation and international cooperation, via effective initiatives such as G20 Action Plan on the 2030 Agenda for Sustainable Development endorsed at last year’s G20 Hangzhou Summit. The conception and promotion of collaborations among various actors such as the UN, non-UN entities and the government and private sector in individual fields such as climate change and health is also an area where G20 can contribute.

2. Overview of the dinner hosted by the Federal Minister of Germany 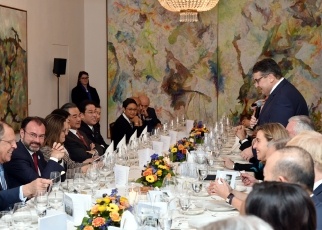 (1) Only the representatives of each country and organizations attended the dinner (no-one else accompanied the representatives other than interpreters), and an open and candid exchange of views took place, without concrete agenda. At the beginning, UN Secretary-General Guterres reviewed the international order since World War II, and noted that it is important to shape a rule-based international order, as well as to cultivate trust between peoples, between nations and furthermore to international organizations including the UN for that purpose. Other participants repeatedly pointed out that it is important for the international community to respect rules and furthermore take appropriate measures in fields where rules are in the process of being formulated, such as cyberspace and the Internet.

(2) Foreign Minister Kishida explained that in addition to the importance of formulating appropriate rules in fields such as cyberspace where rules have not necessarily been formulated up to now, and stressed the importance of the rigid adherence to existing rules by the international community, including the UN and the G20, since it is problematic if existing rules are not respected properly or are distorted in one’s own favor.