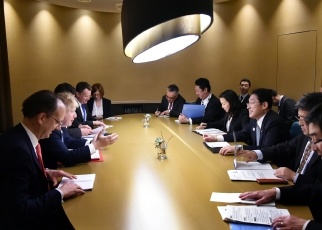 On February 16, from 9:50 p.m. (5:50 a.m., February 15, Japan time) for approximately 40 minutes, Foreign Minister Fumio Kishida, who is visiting Bonn, Germany, to attend the G20 Foreign Ministers’ Meeting, held a foreign ministers’ meeting with the Rt. Hon. Boris Johnson MP, Secretary of State for Foreign and Commonwealth Affairs of the United Kingdom of Great Britain and Northern Ireland (UK). The overview of the meeting is as follows.

Minister Kishida stated that amid the growing tendency of protectionism and inward-looking sentiment in the world, Japan would like to coordinate more closely with the UK, which shares fundamental values with Japan. In response, Secretary Johnson said that he completely agreed, and that the relationship with Japan was very important and he would like to further strengthen it.

With regard to the UK’s exit from the EU, Minister Kishida emphasized the importance of ensuring European unity, in addition to the importance of ensuring transparency and predictability. Secretary Johnson replied that the UK hoped to continue to be an attractive place and a gateway to the EU market for Japanese companies.
Furthermore, both Ministers confirmed that they would cooperate to reach an agreement in principle on the Japan-EU Economic Partnership Agreement (EPA) as soon as possible.

(1) The two Ministers exchanged views on the situation in the East China Sea and South China Sea, and shared the view that they would continue to coordinate closely to maintain the international order based on the rule of law.
(2) Given the ongoing challenge to the international community including North Korea’s launch of ballistic missiles, in addition to the situation in the East China Sea and South China Sea, the two Ministers shared the importance for the G7 to send a strong message regarding these issues that Asia faces.
(3) Minister Kishida stated that the UK’s engagement in the Asia-Pacific region was becoming more important in light of the security environment in the region, which was becoming increasingly severe as mentioned above. From that standpoint, the two Ministers welcomed the signing of the Japan-UK Acquisition and Cross-Servicing Agreement (ACSA) last month. In addition, they shared the view that they would continue to further strengthen security and defense cooperation, through holding joint exercises and other initiatives.
(4) With regard to Japan-UK collaboration in assistance for developing countries in the area of security and defense, both Ministers confirmed that Japan and the UK would collaborate to provide training on countering violent extremism to implement training to Indonesia’s law enforcement agency and other entities.
(5) The two Ministers also exchanged views on the Russia-Ukraine situation, and confirmed they would work closely together while attaching importance to G7 solidarity.

(1) From the end of February 2017, the UK will hold training aimed at strengthening the capacity for countering violent extremism, mainly for Indonesia’s law enforcement agency, at Indonesia’s Jakarta Centre for Law Enforcement Cooperation (JCLEC) (Note: A facility that is implementing training and courses on countering terrorism and extremism for Indonesia’s law enforcement agency and other entities, in cooperation of various countries). Taking this opportunity, Japan will dispatch a Minister of the Embassy of Japan in Indonesia to the training as a lecturer to hold lectures, to collaborate with the UK by taking on part of the training.
(2) This support by Japan and the UK is expected to strengthen Indonesia’s capacity for countering violent extremism and promote the maintenance of public order and social stability.
(3) This cooperation on supporting capacity-building in developing countries is being undertaken based on the agreement reached at the Japan-UK Foreign and Defense Ministers’ Meeting (“2+2”) held in Tokyo in January 2016.