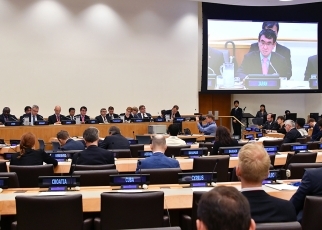 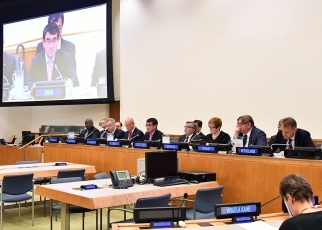 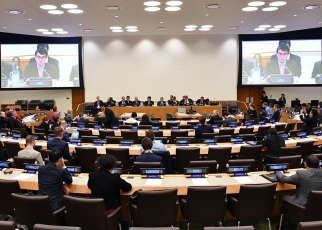 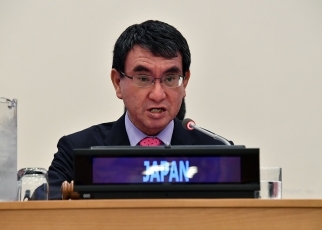 (1) Approximately 70 countries participated in the ninth Ministerial Meeting of the Friends of the CTBT, including about 30 Foreign Ministers from co-hosting Friends of the CTBT (Japan, Australia, the Netherlands, Germany, Canada and Finland), Belgium and Iraq, which are co-coordinators for facilitating entry into force of the CTBT.

(2) As a Co-chair, Japanese Foreign Minister Kono made the opening remarks (PDF)

and delivered her closing remarks.

（2）The international community reconfirmed its firm commitment on the promotion of early entry into force, the universalization and the reinforcement of verification regime of the CTBT, and the strong will to urge the remaining eight States listed in Annex 2 of the Treaty, especially North Korea, to sign and ratify the CTBT. Such a strong message was also expressed by the Ministerial Meeting of the Friends of the CTBT through adopting the Joint Ministerial Statement.

（3）As a co-chair of the CTBT Friends and as a leading country on nuclear disarmament, Japan demonstrated its contribution to advancing the CTBT.

（Note）The Ministerial Meeting of the Friends of the CTBT

(1) The Meetings have been held biennially since 2002 in order to maintain and strengthen the momentum towards the entry-into-force of the CTBT even in the years when an Article XIV conference is not held The Meetings issue a Ministerial Joint Statement as a meeting outcome. The First Meeting of the Friends of CTBT took place in 2002, co-hosted by Japan, Australia, and the Netherlands, being held 8 times.

(2)The Friends of the CTBT is a group of nations initiated by Japan, Australia, and the Netherlands, aiming to coordinate and promote efforts to facilitate entry into force of the CTBT mainly in Vienna where the Preparatory Commission for the Comprehensive Nuclear-Test-Ban Treaty Organization (CTBTO) is located. The group currently consists of six countries including the three above-mentioned plus Canada, Finland, and Germany.