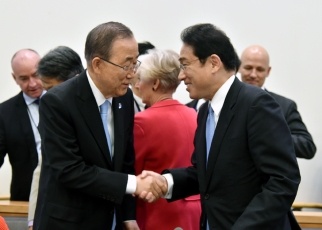 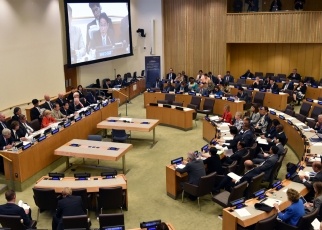 （2）As a Co-chair, Australian Foreign Minister Bishop made the opening remarks and United Nations Secretary-General Ban Ki-moon delivered a statement. They highlighted the urgent need for the ratification of states whose ratification is required for the entry into force of the treaty to move forward with ratification and called for efforts to realize early entry into force of the treaty. Mr. Frank-Walter Steinmeier, Federal Minister for Foreign Affairs of Germany, Mr. St?phane Dion, Minister of Foreign Affairs of Canada, Mr. Bert Koenders, Minister of Foreign Affairs of the Netherlands, and other representatives of Friends Member countries as well as Mr. Yun Byung-se, the Minister of Foreign Affairs of the Republic of Korea,  Ms. Retno L. P. Marsudi, Minister for Foreign Affairs of the Republic of Indonesia, and Mr. Lassina Zerbo, Executive Secretary of the Preparatory Commission for the Comprehensive Nuclear-Test-Ban Treaty Organization (CTBTO) delivered statements. Many countries called for early entry into force of the CTBT and stressed the importance of building inspection capabilities. There were also many remarks condemning North Korea's recent nuclear test, and strongly urging it to comply with relevant UN Security Council resolutions and other commitments and not to conduct further nuclear tests. Furthermore, Myanmar and the Kingdom of Swaziland announced their ratifications of the CTBT (which makes number of ratifying states, 166).

（3） Finally, Minister Kishida, as a co-chair, adopted the Ministerial Joint Statement on Promoting Effectuation of the CTBT (PDF)

and delivered his closing remarks (PDF)

（3）Minister Kishida stated that North Korea's nuclear tests are totally unacceptable and advocated the necessity of early entry into force of the CTBT in order to solidify a legal ban on nuclear tests. Additionally, the adoption of the Joint Ministerial Statement as the co-chair enabled this Ministerial Meeting of the Friends of the CTBT to sent a strong message.

（Reference）Foreign Ministers’ Meeting of the Friends of the CTBT

(1)This meeting takes place in the off year for the Conference on Facilitating the Entry into Force of the CTBT (held once every two years; Foreign Minister level) and aims to maintain and strengthen momentum for bringing the CTBT into force.  It issues a Ministerial Joint Statement as the meeting outcome.  The First Meeting of the Friends of CTBT took place in 2002 with Japan, Australia, and the Netherlands as co-chairs. Seven meetings were held prior to this one.