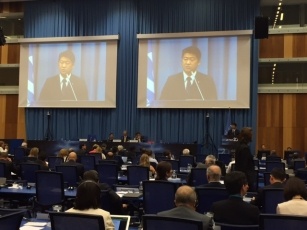 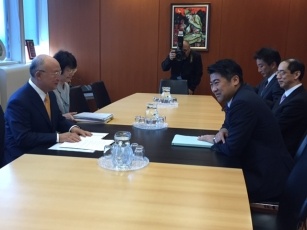 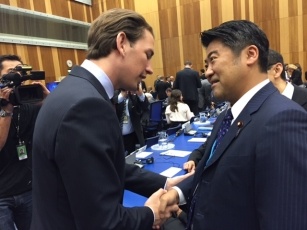 1 On June 13, State Minister for Foreign Affairs Seiji Kihara attended the Comprehensive Nuclear Test Ban Treaty (CTBT) Twentieth Anniversary Meeting which commemorates the 20th year of the adoption of the Treaty. In his statement, State Minister Kihara emphasized the significance of the CTBT in terms of nuclear disarmament and non-proliferation as well as its progress achieved to date, and called upon to make further efforts toward the entry into force of the CTBT.
2 On this occasion, State Minister Kihara held a meeting with Mr. Yukiya Amano, Director-General of the International Atomic Energy Agency (IAEA), and State Minister Kihara stated that Japan highly appreciates the IAEA's efforts such as on the  monitoring and verification of the final agreement on the Iranian nuclear issue (Joint Comprehensive Plan of Action: JCPOA), the peaceful uses of nuclear energy and nuclear security. He also noted that Japan will continue to support the IAEA 's activities under the leadership of DG Amano for its future progress