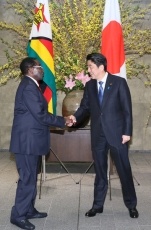 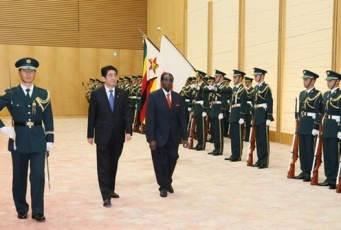 On Monday March 28, 2016, Mr. Shinzo Abe, Prime Minister of Japan, held a summit meeting for approximately 75 minutes starting at around 18:20 with H.E. Mr. Robert Gabriel Mugabe, President of the Republic of Zimbabwe, who was paying an Official Working Visit to Japan. 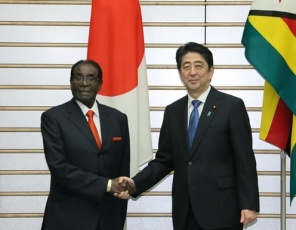 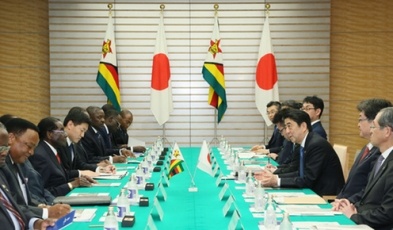 After the summit meeting, the two leaders signed a joint statement (PDF)

and with the presence of the two leaders, the Exchange of Notes between the Government of Japan and the Government of the Republic of Zimbabwe concerning Japanese grant assistance on the Economic and Social Development Programme on infrastructure development was signed. Following this, a joint press conference by the two leaders was held. Subsequently, Prime Minister Abe and Mrs. Abe hosted a dinner, where the two leaders had a conversation on a broad range of topics related to the bilateral relationship, including activities of Japan Overseas Cooperation Volunteers and Japanese companies in Zimbabwe.
The overview of the summit meeting is as follows:

(1) Prime Minister Abe welcomed the visit of President Mugabe as a senior African leader and longstanding friend of Japan and mentioned that Japan would like to make successful this year’s TICAD to be held in Africa for the first time with the attendance of President Mugabe and that he would like to further strengthen the relationship between the two countries taking the opportunity of this visit.

(2) In response, President Mugabe thanked Japan for the invitation to this visit, and mentioned that he would like to build on this visit to further enhance bilateral relations with Japan and that he is looking forward to participating in the coming TICAD in Africa, and to learning ethics and knowhow from Japan since he respects Japan’s experiences of development despite its lack of natural resources. He also mentioned that he expected Japan’s support to this end.

(1) Prime Minister Abe announced his willingness to continue providing assistance to Zimbabwe following last year’s grant aid (approximately 1.8 billion yen). Specifically, he announced 1) a grant aid for infrastructure development amounting 600 million yen, 2) a implementation of a preparatory study for Zimbabwe-Zambia road improvement, and 3) a start of considerations on assistance to respond to the food shortages caused by drought. Prime Minister Abe requested President Mugabe to improve the business environment in Zimbabwe to promote trade and investment and expressed his willingness to expand people-to-people exchanges with Zimbabwe.

(2) In response, President Mugabe expressed appreciation to Japan for the above-mentioned support and past assistance from Japan such as human resource development and humanitarian aid. In addition President Mugabe explained Zimbabwe’s Indigenization Act in regard to the business environment.

(1) Prime Minister Abe once again mentioned TICAD VI to be held in Kenya in August, and explained his intention to promote Africa’s development agenda, Agenda 2063, through the TICAD process, and to demonstrate Japan’s contribution that is distinctive to Japan, such as quality infrastructure investment and human resource development and strengthening Public-Private Partnership.

(2) In response, President Mugabe stated that he would provide whatever assistance needed for the success of TICAD VI and he hoped to discuss Agenda 2063 as Africa’s own development plan at TICAD VI expecting Japan’s supports to realize the Agenda.

4. Strengthening cooperation in the international fora

The two sides shared the view to cooperate on various issues that the international community faces, including the early realization of the United Nations Security Council reform.