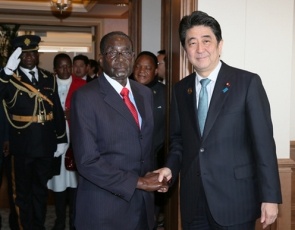 On March 15, commencing at 10:25 a.m. for approximately 40 minutes, Prime Minister Shinzo Abe held a meeting with H.E. Mr. Robert Gabriel Mugabe, President of the Republic of Zimbabwe, who is currently visiting Japan in order to attend the Third UN World Conference on Disaster Risk Reduction. The overview of the meeting is as follows.

1. At the beginning, Prime Minister Abe stated that he welcomed the opportunity for a reunion with President Mugabe after TICAD V. He also expressed his desire to cooperate for the success of the UN World Conference on Disaster Risk Reduction and to have President Mugabe see the recovery of the area affected by the Great East Japan Earthquake. Prime Minister Abe also congratulated President Mugabe on his assumption of the Chair of the African Union, and expressed his hope that Japan-Africa relations would deepen further. In response, President Mugabe expressed his gratitude for the invitation to the Conference, agreed on the need to deepen Japan-Africa relations, and stated that the Conference was an important opportunity to discuss and share knowledge about how to respond to natural disasters.

2. Prime Minister Abe explained Japan’s initiatives for human resources development and humanitarian assistance in Zimbabwe and stated that he would like to cooperate toward the next TICAD to be held in Africa in 2016. In response, President Mugabe stated that Zimbabwe and many countries in Africa were hoping for cooperation with Japan to achieve economic and social development and expressed his desire to strengthen relations with Japan not only as the President of Zimbabwe but also as the Chair of the AU. The two leaders also exchanged their views on cooperation for UN Security Council reform and other issues.