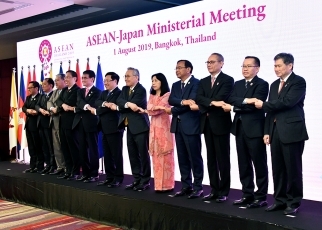 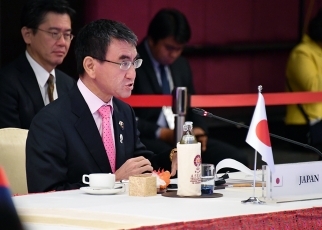 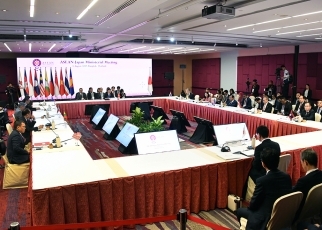 On August 1, from around 10:00 a.m. (local time) for approximately one hour, the Japan-ASEAN Ministerial Meeting was held in Bangkok, the Kingdom of Thailand. Foreign Misister Kono Taro attended the meeting. The overview of the meeting, with a focus on the statements by Minister Kono, is as follows. Minister Kono co-chaired the meeting with H.E. Mr.Minh, Deputy Prime Minister and Minister of Foreign Affairs of Viet Nam.

Deputy Prime Minister Minh stated that he would like to further strengthen Japan-ASEAN Strategic Partnership, referring to the Joint Statement to commemorate 45th Anniversary of Friendship and Cooperation between Japan and ASEAN last November. Deputy Prime Minister Minh also expressed his gratitude for contribution by Japan and ASEAN countries to the success of the ASEAN-Japan Day events which took place in Hanoi last June and July. Recalling that Japan ASEAN Leaders reaffirmed their commitment on the occasion of 45th Anniversary, Minister Kono stated that much progress has been made, as the signature of Japan ASEAN Technical Cooperation Agreement and the success of ASEAN-Japan Day events. Minister Kono also mentioned that he hoped to have a fruitful discussion, building up on the outcome of the G20 Summit chaired by Japan.

2. Review of ASEAN-Japan Cooperation and its Future Direction

On behalf of ASEAN, Deputy Prime Minister Minh reviewed the outcome of Japan ASEAN cooperation in such fields as political and security, economy, and socio-culture, and expressed his expectation for further progress of Japan-ASEAN cooperation. In particular, Deputy Prime Minister Minh expressed ASEAN’s hope for the extension of the activities of the Japan Foundation Asia Center.
ASEAN countries also expressed their appreciation and hope for Japan’s support in various areas such as support for ASEAN’s integration through Japan ASEAN Integration Fund (JAIF), disaster management cooperation through the ASEAN Coordinating Center for Humanitarian Assistance on disaster management (AHA Center), capacity building, and people-to-people exchanges.
Minister Kono stated that Japan fully supports the theme of Thailand’s ASEAN Chairmanship:“Advancing Partnership for Sustainability” and Japan hopes to issue a leaders’ joint statement on connectivity, with a view to enhancing ASEAN connectivity. Minister Kono added that Japan will host the ASEAN Smart Cities Network (ASCN) in Yokohama this October, and that Japan also will host 14th United Nations Congress on Crime Prevention and Criminal Justice in Kyoto in April next year. Referring to the contribution made by Japan Foundation Asia Centre thus far, Minister Kono stated that he would like to discuss with ASEAN countries to further advance such exchanges.

3. Exchange of Views on Regional and International Issues

Welcoming the adoption of the “ASEAN Outlook on the Indo-Pacific”, Minister Kono looked forward to seeking synergy between this “Outlook” and Japan’s “Free and Open Indo-Pacific”. Minister Kono stated that he will move forward concrete cooperation in various fields including quality infrastructure in accordance with international standards as endorsed in the G20 Principles for Quality Infrastructure Investment.

Minister Kono stated that Japan regrets North Korea’s recent launches of ballistic missiles, and that Japan supports the US-North Korea process together with the ASEAN countries. Minister Kono also stated that it is critical to maintain the full implementation of the UN Security Council regulations including countering “ship-to-ship transfers”. Furthermore, following ASEAN's remark reaffirming the importance of addressing humanitarian concerns including the abductions issue, Minister Kono requested support towards early resolution of the abductions issue.

Minister Kono paid tribute to ASEAN’s effort including the COC negotiation and hoped that the conclusion of COC would lead to a peaceful and open SCS. In addition, Minister Kono shared a serious concern that ASEAN countries expressed about the situation on the ground, which is worsening every year, and stated that the parties concerned need to pursue a peaceful resolution of conflicts and to realize demilitarization.