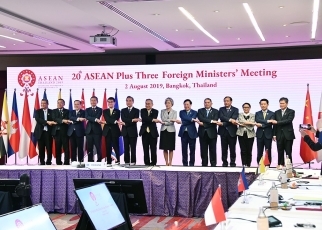 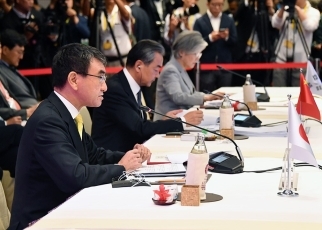 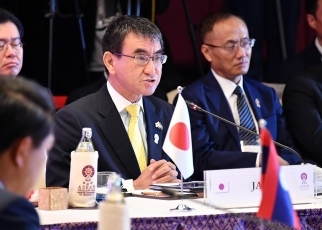 On August 2, from around 9:00 a.m.(local time) for approximately one hour and three‐quarters, the ASEAN Plus Three Foreign Ministers Meeting was held in Bangkok, the Kingdom of Thailand. Foreign Minister Kono Taro attended the meeting. The overview of the meeting, with a focus on statements by Minister Kono, is as follows. H.E. Mr. Don Pramudwinai, Minister of Foreign Affairs of the Kingdom of Thailand and H.E. Mr. Wang Yi, State Councilor of the People’s Republic of China co-chaired the meeting.

Opening remarks were made by H.E. Mr. Don Pramudwinai, Minister of Foreign Affairs of the Kingdom of Thailand as ASEAN chair and H.E. Mr. Wang Yi, State Councilor of the People’s Republic of China as the chair of Japan-China-Korea Trilateral cooperation.
Foreign Minister Kang Kyung-wha expressed the position of the government of the Republic of Korea on Japan’s review of its export control.

Minister Kono stated that (1) APT has been promoting practical cooperation in such fields as food security, finance and economy, education, the environment, culture and youth exchange over the past 20 years. APT has made huge contribution to ensuring peace, stability, and prosperity in the region. (2) Amid growing protectionism in recent years, APT needs to maintain and strengthen the order for free and fair world trade with a view to maintaining and promoting economic growth in the region. (3) As confirmed in the Chairman's Statement of the ASEAN Summit Meeting in June, concluding RCEP by the end of this year by ASEAN+6 is crucial. (4) Maintaining effective export control over sensitive goods and technologies from a security perspective is Japan’s responsibility as a member of the international community. Japan’s necessary and legitimate review of its export control is fully compatible with the free trade regime including the WTO Agreement and the relevant rules.

2. Review and Future Direction of ASEAN Plus Three Cooperation

Minister Kono explained various efforts and initiatives that Japan has been undertaking in line with the purpose of the APT Cooperation Work Plan as follows;

With a view to promoting a free and open Indo-Pacific, Japan will cooperate with APT and other partners to enhance connectivity in the Indo-Pacific region centered on ASEAN through promoting quality infrastructure development, in accordance with international standards, based on the G20 Principles for Quality Infrastructure Investment endorsed at the G20 Osaka Summit.

Japan has been developing a disaster insurance scheme named “SEADRIF”. Its first operation is expected to start for Lao PDR and Myanmar by the end of this year. Japan believes that this will contribute to disaster-prevention measures in the region.

Japan has been playing a leading role in the ASEAN+3 Emergency Rice Reserve (APTERR) Agreement. In FY2018, Japan decided to stockpile the rice for the Philippines and Myanmar, and sent it to these countries in July.

Japan encourages ASEAN members to endorse the “Osaka Blue Ocean Vision” that was shared at the G20 Osaka Summit. Under Japan’s “MARINE Initiative”, Japan will support ASEAN countries’ efforts including their capacity building and infrastructure development in the area of waste management.

In order to promote the mobility of higher education with quality assurance within the APT region, Japan will promote policy dialogue and implement advanced educational joint programs with policymakers and relevant stakeholders. Japan wishes to move forward “Campus Asia”, high-quality inter-university exchange program, for a possible partnership with the ASEAN region in the future.

Japan would like to promote the “Asia Health and Wellbeing Initiative”. Japan is currently working with ASEAN countries to conclude MOCs to formalize cooperation frameworks and bring about concrete projects. Japan will promote the healthcare industry in Asia, including pharmaceutical and medical device industries.

More than eight years have passed since the Great East Japan Earthquake. It is regrettable that some APT countries are still maintaining import restrictions on Japanese foods. Japan would like to emphasize that the safety of Japanese foods is assured based on scientific evidence and that necessary monitoring and control measures are enforced. Japan would like to strongly urge countries concerned to promptly lift the restrictions.

During the meeting, many countries welcomed APT cooperation in such fields as finance, economy, food security, poverty reduction, disaster management, people-to-people connectivity and the tourism. They also made positive statements on promoting substantive cooperation.

3. Exchange of Views on Regional and International Issues

Regarding North Korea, Minister Kono stated that Japan regrets North Korea’s launches of ballistic missiles, It is important that the international community remain united in supporting the US-North Korea process. And Minister Kono also stated that It is critical to maintain full implementation of the UNSCRs including countering against “ship to ship transfers”, Japan hopes to continue close cooperation with all the countries towards early resolution of the abductions issue.

In response to these states, APT countries stated that necessity of the full implementation of the UNSCRs and the importance of the resolution through dialogues.

Minister Kono reiterated his explanation on Japan’s review of its export control meausres. Minister Kono also referred to two other issues that are separate from the GOJ’s review of its export control measures and stated that Import restrictions imposed by the ROK on Japanese fishery products are non-scientific, unfair measures and it should be promptly removed. And The decisions of ROK’s Supreme Court on the issue of former workers from the Korean peninsula fundamentally overturned the legal basis of the normalization of Japan-ROK relations and that the ROK is required to observe international law.